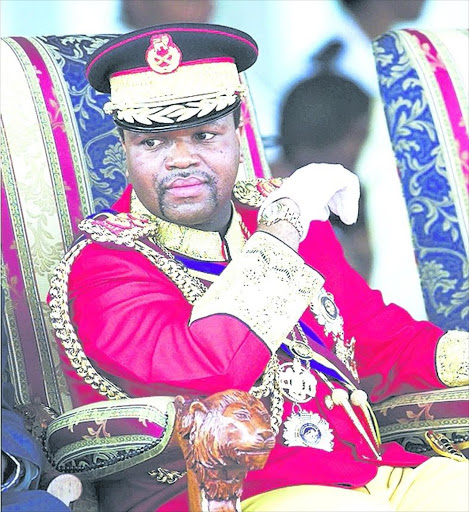 Swaziland's King Mswati III called for his male subjects to get circumcised as he endorsed a campaign aimed at tackling the world's highest HIV infection rate.

Flanked by a large royal contingent including his mother, who rules alongside him, four of his 13 wives and several children, Africa's last absolute monarch said men and boys needed to get circumcised to help fight the "terrorist" virus, which infects one in four adults in the kingdom of nearly 1.2 million.

Studies have found men without a foreskin are 60 percent less likely to get HIV, the virus that can lead to AIDS.

"It seems fitting that our men and young boys should be given an initiative that will help them fight this disease," Mswati told a gathering of thousands in the southern town of Mankayane, where he gave his official endorsement to the campaign.

"This virus I shall liken to a terrorist. It is here to finish off our people."

Mswati was entertained by bare-breasted teenage girls, troops of warrior regiments and a military brass band.

Urging his nation to "take care of your lives -- stay away from activities that could give you the disease," the king struck a very different note from his pronouncement to parliament a decade ago that HIV-positive people should be "branded and sterilised".

The US-funded circumcision campaign aims to snip 80 percent of Swazi males aged 14 to 49 within a year.

Officials hope to avert 90,000 new infections and save the health system millions of dollars over the next decade.

Circumcision used to be widespread in Swaziland, but was abandoned in the 19th century.

The king likened the return of the practice to other traditions he revived in 2001 as a solution to the rampant epidemic: requiring young girls to wear tassels to display their virginity and banning men from having sex with girls under 18.

When the king broke his own ban by taking a 17-year-old wife, he fined himself a cow.

The US government is spending $30 million (21 million euros) on the campaign -- nearly $30 per inhabitant of the tiny kingdom.

"The goal is to have zero new infections by the year 2020," said US Ambassador Earl Irving.

Swaziland has a way to go to reach that goal. Four out of 10 pregnant women test HIV-positive at clinics, Health Minister Benedict Xaba told the media Thursday.

Since the project started six months ago, results have not been encouraging. Only 3,000 have braved the scalpel despite a massive advertising campaign calling on men to "Circumcise and Conquer".

Organisers are pinning their hopes on Mswati, known to his people as "the mouth that speaks no lies", to breathe life into the campaign.

The king still commands enormous respect, but in the rural areas near Mankayane dissatisfaction is bubbling to the surface as his subjects feel the pinch of a deepening economic crisis.

"The king has a lot of money in the bank but he can't help us. He has many women and a luxurious life. His children get an overseas education. He doesn't care about Swazis," local Boxer Vilakazi told AFP.

"I love the king but 90 percent of youth are not working. Only those close to the king get jobs," said 21-year-old Mthobisi Dlahla, who said he planned to go for the surgery for his own safety -- not because Mswati said so.

The polygamous monarch has been criticised for failing to lead by example in his kingdom, where multiple partnerships are seen as the major catalyst of the AIDS crisis.

Mswati did not say Friday whether he intended to get circumcised himself.