Mbeki: Africa has lost faith in the UN 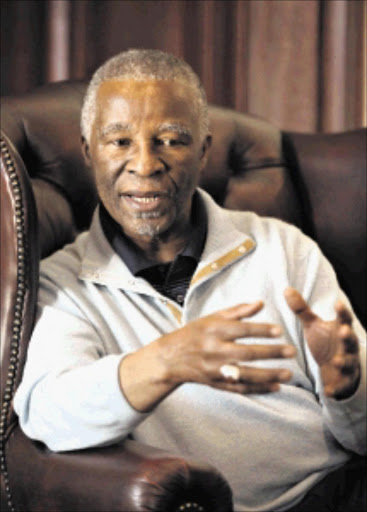 Former President Thabo Mbeki has accused the United Nations of destabilising peace processes in countries such as the Ivory Coast and Libya.

He said Africans had lost confidence in the world governing body and that Western control over the UN would lead to the powerful nations installing leaders they preferred, to run the continent.

Speaking to the Sunday Times, Mbeki called on African leaders to resist interference by the West.

Mbeki gave his views on:

"There is weakened confidence of the Africans in this body. The task of UN peacekeepers in the Ivory Coast was to maintain peace between the North, occupied by the rebels and the South by government. The UN was supposed to make sure that the peace agreement is signed, that the two sides don't clash and find a political solution. But what did the UN do? It opened the door for the rebels in the North to march into Abidjan and carry out operations there side-by-side with the UN forces. These are neutral peace-keepers but they took sides.

In Libya, the UN delegated its responsibilities to the North Atlantic Treaty Organisation (Nato) - a military formation of some countries, not a global body accountable to the UN or us.

"We have the UN acting in a manner which is promoting particular agendas."

"The Security Council has not argued that the situation in Libya and Ivory Coast constituted a threat to international peace and security, because they didn't. Yet they authorise the use of military force.

The UN needs to be restructured in a way that it is representative of the peoples of the world. In the current situation I doubt if some of the members on the Security Council with veto powers are interested to effect structural change which is urgent. They are contemptuous people and are certainly not in the mood in which they can entertain an African view about the fundamental restructuring of the UN."

"I think we can (stop them) provided that we act and they can see that if they take this kind of action they are going to meet the resistance of the entire African continent. That would make them rethink.

"But unfortunately our voice is very weak and we have to do something to strengthen this and speak out about the rights of Africans to decide their future."

"If there was respect for the positions that the African Union had taken to resolving the issue whereby the Libyans get together and decide their future, (there) would have been a process towards democratisation.

"Unfortunately we saw these major powers deciding to intervene in a way which has perpetuated the war. In the Ivory Coast, President Laurent Gbagbo accepted the decision of the AU that he should step down regardless of the rightness or wrongness of the controversy and allow for President Alassane Ouattara to take over.

"When the AU was due to travel to Abidjan to implement that decision, they were blocked by the French and the UN to create space for themselves to carry out military operations together with the rebel forces that were supporting Ouattara.

"This matter was going to be resolved but unnecessary force was used to produce a particular outcome which has created more problems for the Ivorians."

"The problem here is us the member states. The AU Commission complains that they are unable to do their work properly because the member states are not making their contributions to provide the necessary funds to enable the AU to do its work. So you have a situation where the AU wants to carry out an operation - it has to appeal to the EU for funds. The weakness of the commission is a reflection of the way that member states have dealt with the AU."