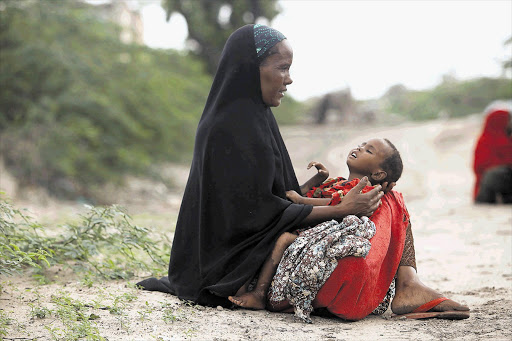 Extreme drought and famine across Somalia is likely to persist in the coming months, tipping the whole of the country's south into famine, experts warned yesterday
Image: ALON SKUY

About 29,000 Somali children have died in the Horn of Africa famine, the worst humanitarian crisis in a generation, US officials said yesterday, pleading for global partners to step up aid urgently.

Despite warnings and images of starving children coming out of the region, and especially war-torn Somalia, the international community has been slow to help.

Somalis are suffering the most, beset by the instability caused by their 20 years of civil war and the refusal of al-Qaeda-linked militants to allow Western aid. The Islamists are preventing starving Somalis from fleeing to neighbouring Ethiopia or Kenya to escape the famine.

"Based on nutrition and mortality surveys, we estimate that more than 29000 children under five - nearly 4% of children - have died in the past 90 days in southern Somalia," said Nancy Lindborg, assistant administrator of the US Agency for International Development.

"It is the most severe humanitarian crisis in a generation, affecting food security for more than 12million people across Somalia, Ethiopia, Kenya, Djibouti and surrounding areas," Democratic Senator Chris Coons said.

All but 400000 of the Somalis in urgent need of aid live in the south of the country, which is controlled by militant groups.

Extreme drought is likely to persist in the coming months, tipping all of the country's south into famine.

The continuing lack of rain meant that the crisis would deepen, the UN's Office for the Co-ordination of Humanitarian Affairs said after three new areas were declared famine afflicted on Wednesday.

The new areas of famine include the capital, Mogadishu, where daily survival is a struggle for the people, now observing Ramadan. Nearly half of Somalia's estimated 10million people require humanitarian aid.

The famine-affected regions are mainly under the rule of militants, who, since 2009, have expelled several foreign aid groups.

The drought has also affected parts of Djibouti, Ethiopia, Kenya and Uganda.