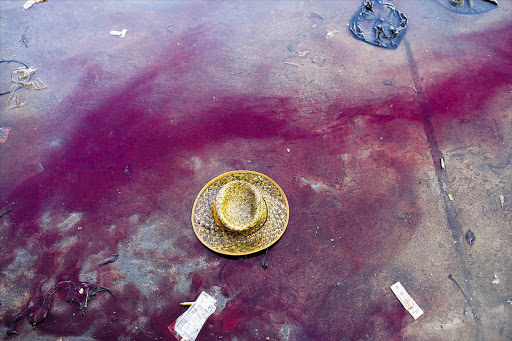 Blood flows where a National Transitional Council fighter was injured by a pro-Gaddafi sniper in a street battle in the centre of the Libyan city of Sirte on Wednesday. The council fighters say this is the final assault on Muammar Gaddafi's home town Picture: MAJID SAEEDI/GALLO IMAGES

Libyan government fighters pulled back under ferocious fire from Muammar Gaddafi loyalists in the fugitive strongman's home town of Sirte yesterday, as their leaders appeared to be backtracking on claims that one of his sons had been captured.

The National Transitional Council forces, which had been hoping to mop up the last pockets of resistance in two residential neighbourhoods in the northwest of the city, withdrew at least 2km to the central police headquarters they captured on Tuesday.

"We have been told to retreat to the police HQ and will be using artillery cannon to hit Gaddafi's forces," fighter Hamid Neji of the Martyrs of Free Libya Brigade said on the new front line. Before the reverse, a field commander of the brigade had said that its fighters were trying to avoid using heavy weaponry against the Dollar and Number Two residential neighbourhoods to avoid civilian casualties. "We are not going very aggressively into these neighbourhoods because there are still families inside them," commander Yahya al-Moghasabi said.

"We believe it will take another three days to capture them," he added.

Britain's The Telegraph reported on its website yesterday that a top adviser of the council's chief, Mustafa Abdel Jalil, backtracked on his announcement that the authority's forces had captured Gaddafi's feared son and national security boss, Mutassim, in Sirte after it was denied by commanders in the city.

"There was some confusion about the reports of Mutassim's capture," The Telegraph quoted Abdelkarim Bizama as saying.

"As soon as we have confirmation, there will be an official announcement of his arrest."

Late on Wednesday, a council commander announced: "Mutassim Gaddafi was captured at Sirte and was transferred to Benghazi."

Hundreds of fighters took to the streets in several Libyan cities and fired shots in the air in celebration.

Gaddafi loyalists have fought tenaciously for weeks in Sirte, one of just two major towns where they still have a foothold, two months after rebels seized the capital, Tripoli.

Before yesterday's setback, Khaled Alteir, a field commander in Sirte, said: "We have control of the whole of the city except neighbourhood 'Number Two' where the Gaddafi forces are surrounded."

Green flags, the symbol of Gaddafi's 42 years in power, still flew above many of the buildings.

NTC tanks moved close up to buildings used by snipers and blasted large holes in the walls. Behind them came pick-up trucks mounted with heavy machine guns, and behind them, the infantry armed with AK-47s began the assault.

Gaddafi loyalists have been firing back on the attackers with small arms and rocket-propelled grenades, but they were no longer using heavier weapons and their forces had lost some cohesion, a council commander said.

"We've noticed now they are fighting every man for himself," said Baloun Al Sharie, a field commander. "We tried to tell them it's enough and to give themselves up, but they would not."

The assault by the new government forces is still being aided by Nato reconnaissance and strike aircraft. Britain said its jets had bombed and destroyed two pick-up trucks belonging to Gaddafi's forces in Sirte on Wednesday.