Zimbabwean conservationists say they are investigating the legality of a hunting spree in the country by the heirs to US magnate Donald Trump's fortune after photos showed up online of the brothers posing with dead game animals. 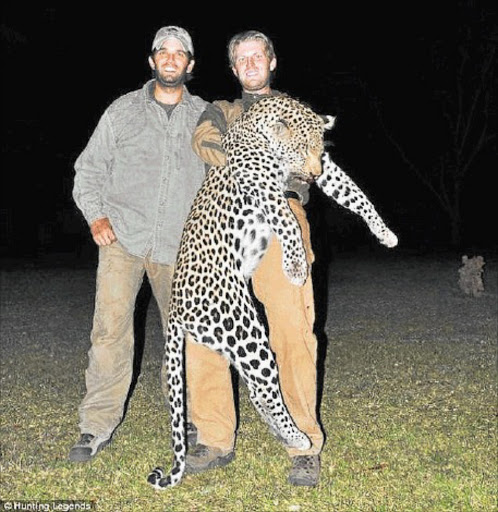 SHOWING THEIR SPOTS: Eric and Donald Trump jnr with a leopard they killed on their hunting trip to Zimbabwe

SHOWING THEIR SPOTS: Eric and Donald Trump jnr with a leopard they killed on their hunting trip to Zimbabwe

The independent Zimbabwe Conservation Task Force said on Friday that Trump's sons Donald Jr. and Eric killed an elephant, an endangered leopard, a buffalo, a crocodile and other "big game" animals on a 2011 trip arranged by a South African safari firm that is not registered in Zimbabwe.

Photographs of the brothers - one with the slain leopard and another showing one brother holding up an elephant's severed tail in one hand and a knife in the other - have been withdrawn from at least one website after a flurry of protests.

Animal protection groups were outraged how "rich people" had boasted about their "shocking and unethical" behaviour, the trust said.

Johnny Rodrigues, the head of the conservationists' alliance, said investigators are sifting through records on whether licence and trophy fees were paid and if the South African firm had been cleared by Zimbabwe wildlife authorities to operate in the northwestern province near Victoria Falls.

If they are found to have breached hunting laws, organisers and hunters can face imprisonment or a fine of up to $500 000 (about R4-million), Rodrigues said.

"The safari operator was obviously paid but the majority of the money probably didn't come into Zimbabwe," he said.

Claims by the Trump brothers they gave the meat from dead animals to impoverished local villagers were also being checked. There are no villages in the northwestern Matetsi district of Zimbabwe where they hunted.

"It is an insult to say 'we gave away the meat'. They mustn't turn around and say that they shot those animals for conservation either," Rodrigues told The AP.

"This is the problem with those who they think they can come to manipulate and control people, destroy natural resources and say 'we came to help'. We don't want them here," he said.

The Trump brothers have said they were hunting last year in an area with an excess of elephants.

In recent years Zimbabwe has not been able to cull elephants in districts where increasing herds are destroying the bush habitat that other species depend on.

Veteran animal rights campaigner Meryl Harrison of the Veterinarians for Animal Welfare in Harare said she was "absolutely disgusted" by photographs of the brothers with animals they shot and the international publicity they've received.

"You shoot an animal and you pose with the dead animal? Is it glorifying hunting? I think it is just sickening," she said. "I just wonder what Donald Trump says, as he is against hunting."

Harrison said Zimbabwe's Wildlife Act of 2000 prohibits hunters from using dogs to hunt leopard or any wildlife unless given special authority in certain conditions.

"A leopard doesn't stand a chance. The dogs chase it up a tree and they stay at the bottom of the tree and the hunter takes an easy shot," she said.