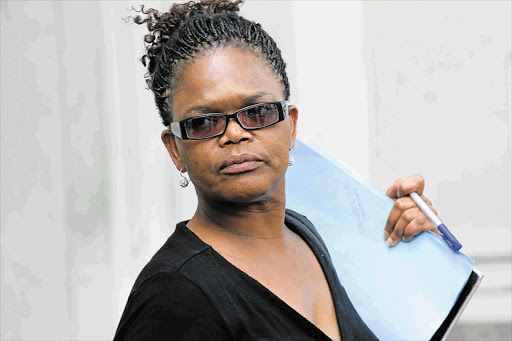 JAILED: Despite being granted bail, Beatrice Mtetwa is still held

Opponents of ZANU-PF criticised the investigation into Hungwe as an attack on the independence of the judiciary.

Zimbabweans voted overwhelmingly in a March 16 referendum for a new constitution that would curb presidential powers, paving the way for elections later this year.

But Prime Minister Morgan Tsvangirai, Mugabe’s rival, and rights groups say the veteran president and his party are already undermining the chances of a free and fair poll.

The state-owned Herald newspaper said Chief Justice Godfrey Chidyausiku had opened an inquiry into Hungwe over allegations he failed to sentence a man convicted of robbery and murder 10 years ago.

It carried an interview with the convicted man in which he said he had been held in jail since 2003 when he was found guilty by Hungwe, but was never sentenced.

Mtetwa, who has won international awards for her defence of journalists and opposition politicians, was arrested on March 17 and accused of shouting at and taking pictures of police who were searching the home of one of Tsvangirai’s aides.

Hungwe ordered her release hours later at a midnight hearing at his farm outside Harare. She was freed on bail on March 25.

The judge was criticised by state media and senior ZANU-PF member Jonathan Moyo, who dismissed his decision as “a night court dispensing night justice under the cover of the night”.

Zimbabwe Lawyers for Human Rights, of whom Mtetwa is the most prominent member, said the investigation into Hungwe could be the beginning of a wider crackdown on judges seen as independent.

“There is a knock-on effect also in relation to the legal profession. Lawyers will similarly become fearful of vigorously and lawfully pursuing their clients’ rights,” it said in a statement.

The chief justice could not be reached for comment by Reuters but the registrar at the Supreme Court told the Herald Chidyausiku would make a statement “at the appropriate time”.

Private media in the southern African nation also attacked the Hungwe investigation. “It falls within an established, clumsy but systematic pattern of harassment and purges of judges considered officially undesirable,” the Zimbabwe Independent, a private weekly, said in a commentary.

Critics say Mugabe, who is seeking to extend his 33 years in power in elections this year, is using intimidation and violence to counter a stiff challenge from Tsvangirai’s Movement for Democratic Change (MDC).

Mugabe denies the allegations, saying he wants a peaceful vote after a disputed and violent poll in 2008 that forced ZANU-PF and the MDC into a power-sharing coalition.