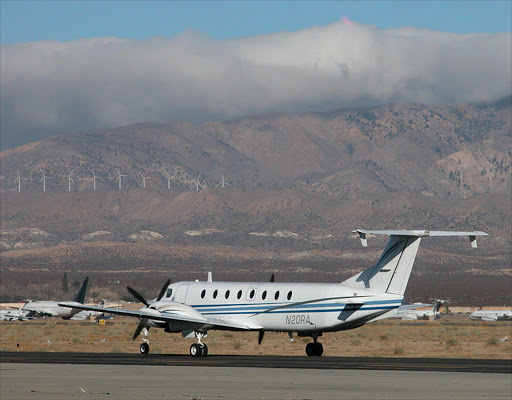 The small plane carrying only its American pilot disappeared 10 days ago just miles from a refueling stop at a West African island in the middle of a tropical storm of thunder and lightning.

Since then, searches with a plane and boats have found no trace of the pilot, 54-year-old missionary Jerry Krause, or the twin-engine Beechcraft 1900C that he was flying from South Africa to Mali.

Krause's family in Mali, where he has lived for 16 years, and in Waseca, Minnesota, believes he is alive and could have landed in hostile territory.

"After much research and digging, there is a 50 percent chance that Jerry's plane crashed," says a message posted Wednesday to their website www.findjerry.com .

"That other 50% is the probability that he was captured and forced to fly for some drug lords or guerrilla members. There is evidence now to support both scenarios."

Family members reached by email would not elaborate on any possible evidence, and the suggestion could not be immediately backed.

The posting said that a missing person's report has been filed in the US, so the country's National Transportation Safety Board can start an investigation into Krause's disappearance.

The Krauses have launched a multifaceted campaign to "find Jerry." Family members are lobbying officials, posting messages on social media and using the Internet to encourage a relay of prayers for his safe return.

Krause's last contact was apparently with the control tower at Sao Tome island, a couple of kilometers north of the equator and 240 kilometers from the coast of Gabon.

"We have no idea what happened to him," Januario Barreto, the control tower chief, told The Associated Press by telephone Wednesday.

He said Krause called in to say he was 14 kilometers from the island when lightning struck the tower and knocked out the power. That was just before 4 p.m. local time, still in daylight, on Sunday, April 7. When generators kicked in, soon afterward, Krause could no longer be reached, Barreto said.

He said air traffic controllers immediately contacted the nearest control towers on the African mainland at Libreville, Gabon and Brazzaville, Republic of Congo, to see whether they had heard from Krause. They had not.

Navy and Coast Guard vessels are still looking for any trace of Krause's plane, Barreto said.

The family's website said they have sent a Portuguese-speaking envoy to Sao Tome, at the family's expense, to "get the official documentation as to what actually took place there from Jerry radioing in to land to their responses and follow-up.

Krause's employer, Eric van der Gragt, said the control tower did not inform others that there was a missing pilot and plane until almost 24 hours after the disappearance.

He said he sent a plane to search for Krause for two days that week, after the Sao Tome Coast Guard had found nothing on the Monday and Tuesday following his disappearance. The Sahel plane searched around the twin-island nation of Sao Tome and Principe, he said.

Van der Gragt said the turboprop Beechcraft that Krause was flying did not belong to his company but, he believed, to a company based in Senegal.

Krause's family is heartened that searchers have found nothing in the Gulf of Guinea, saying that an absence of wreckage or emergency locator transmitter signals are hopeful signs.

The oil-rich Gulf of Guinea, where Krause disappeared, has been increasingly targeted by armed pirates who hijack ships' cargoes, including a British ship in February.

At their Web site and on Facebook, the Krause family details how they lobbied officials of the French cellular service Orange, to which the pilot was subscribed, in an effort to get them to try to track his iPhone and discover his last position.

At first the company resisted, then said it was unable to help because his subscription was based in Mali, according to the Web site. Orange was able to turn off the iPhone from afar, to conserve its battery.

Krause's family last heard from him when he called his wife Gina from South Africa to let her know he was on his way home to Bamako. The two have lived as missionaries in Africa for 25 years, the last 16 of them in Mali, a mainly Muslim country.

Krause had served as a missionary pilot for the Nampa, Idaho-based Mission Aviation Fellowship until 2009 when the air service pulled out of Mali.

Jerry and Gina Krause stayed on. Many foreign companies and charities have left Mali since jihadist fighters swarmed over the north last year. France and several African nations sent troops this year when the Islamic fighters, allied with al-Qaeda, started to advance on Bamako, the capital.

"God knows where Jerry is," Gina Krause says, expressing certainty and her faith in a posting at the findjerry Web site. "I know I serve a God who can do the IMPOSSIBLE."