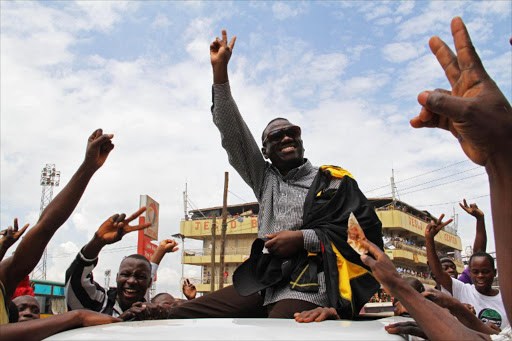 Armed police surrounded the home of the leader of Uganda's protest movement, put him in a car and drove him to a secret location in the pre-dawn hours of Monday, the day he planned to launch a new wave of anti-government demonstrations across the East African country.

The police said it was a "preventive arrest," but for Kizza Besigye -a three-time presidential aspirant who has presented the most formidable challenge to the rule of Uganda's long-serving president - the move highlights the government's crackdown on popular protests against corruption and the high cost of living.

Besigye's "Walk to Work" protest movement in the aftermath of the 2011 election was violently stopped within months. The rights group Human Rights Watch says Uganda's security forces killed at least nine people in confrontations with protesters in April 2011.

Police arrested the head of the movement Monday because he planned to cause "chaos" in the capital, said Ugandan police spokesman Patrick Onyango.

"Besigye has been taken under preventive house arrest," he said. "This is to stop him from paralyzing business life across the country."

At least two other Besigye associates, including the mayor of Kampala, had been similarly restricted, Onyango said.

The pre-dawn arrests show how pro-active police are getting as they contain activists who are trying to spark a wider political movement after 27 years under the same president. President Yoweri Museveni, who took power by force in 1986, is increasingly criticized by rights advocates and political opponents who say he encourages corruption and has not done enough to lift the conditions of the poorest Ugandans. Museveni is also accused of using the armed forces to silence political dissent using tactics that have made Kampala, the capital, a no-go zone for opposition activism.

Police frequently use live bullets and tear gas to disperse crowds gathering to listen to politicians they accuse of trying to ignite a campaign of civil disobedience that could bring down the government. The activist group responsible for the street protests -4GC, which stands for the Ugandan national motto "For God and My Country" - was declared an illegal organization by Uganda's attorney general, one of the reasons given by the police as they crack down on its popular activities.

Mathias Mpuuga, a Ugandan lawmaker who is one of the leaders of the protest movement, said such tactics would be successful only in the short run.

"We shall go on with our program," he said. "We are not organizing an event. We are organizing a protracted struggle against this tyranny."

Police say their tactics are justified in order to maintain public order, but rights advocates say they violate the country's constitution and amount to an abuse of power.

Livingstone Sewanyana, who runs a Kampala-based rights watchdog called the Foundation for Human Rights Initiative, said the arrests and moves to stop demonstrations reinforced a growing view of Museveni's administration as intolerant of political dissent.

"It speaks of a country where respect for fundamental rights is on a downward trend," he said. "It's all about fear and I think the fear is being expressed that way."

Uganda's next election is still three years away, and it remains unclear if Museveni will run again. But more officials previously close to him have challenged the president in recent times, fuelling rumors that his control of the ruling party is fading.

A former deputy president, Gilbert Bukenya, has announced plans to seek the presidency in 2016, while a four-star general who sat on the military's high command recently defected to London and accused Museveni of wanting to keep power within the first family at all costs.