Blood on their hands 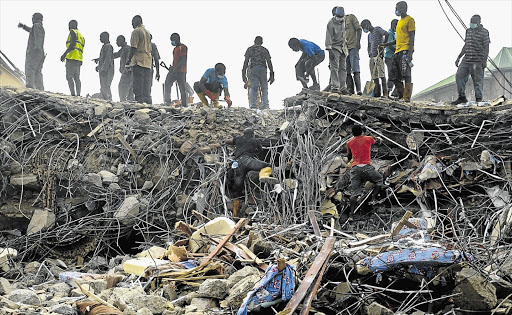 DEVASTATION: Rescue workers search through rubble from the collapsed guesthouse at the Synagogue Church of All Nations in Lagos this week Picture: EPA

Chaos. Incompetence. Lies. As the first full picture of the horror of the Nigerian church collapse surfaces, South Africans are left wondering how many lives could have been saved if Pastor TB Joshua's church and Nigerian authorities had co-operated fully in rescue attempts.

A total of 84 South Africans died and many were injured when a six-storey accommodation building belonging to Joshua's Synagogue Church of All Nations collapsed in Lagos last Friday.

This is the highest number of South Africans to die on foreign soil in a single incident during peacetime.

Details have now emerged showing how stalling by Nigerian officials and the church frustrated efforts by South Africa to send a specialist search and rescue mission that could have helped reduce the number of fatalities. Relatives were also barred from seeking out their loved ones.

THE TRAGEDY AND ITS HORRIFIC AFTERMATH

The building collapse at 12.44pm sent shockwaves throughout the populous Nigerian commercial capital.

Joshua was said to be in the mountains praying at the time.

Among the first people to rush to the site was South African Dr Thandeka Mayekiso, who was in a coffee shop on the church campus just metres from the scene.

She heard a "droning sound" coupled with the sound of bricks dislodging. "Everything was shaking all at once and I actually initially thought it was an earthquake."

Chaos ensued as people from the collapsed building ran into the cafeteria, and people inside, thinking it was an earthquake, tried to get out.

A cloud of dust engulfed the cafeteria within a few minutes. She eventually got outside and went towards the church and its small sick bay. As she walked in, she stepped into a pool of blood and realised she had lost her shoes along the way.

After taking a minute to sit down and clear her head, Mayekiso "took over". With a team of people, including some nurses and a South African paramedic, she started treating people.

"I made it known I am not a practising doctor. We didn't have anything, we were using plastic bags as gloves and someone brought me a pair of flip flops from the church."

There was tension between her and the church's matrons. "It was all about who gets to the patients first and who does what. It was just internal health politics."

By sunset on Friday, the first Nigerian doctor arrived. He left again at midnight and did not return until Monday morning.

Nigerian rescue workers were on the scene at 1.50pm. Ibrahim Farinloye, a spokesman for the Nigerian Emergency Management Agency, said rescue workers managed to save three people who were trapped near their gathering point. But church officials prevented rescuers from accessing the church.

"Some of us were even attacked [by church members]. We wanted to ask the military to deploy to force access for us, but there were many foreigners at the church and we did not want to create an international incident," said Farinloye.

Church members were also hostile to journalists and smashed at least one television camera.

Farinloye said rescuers lost the two or three critical hours immediately after a disaster when most lives are saved. The emergency agency only managed to gain further access to the site again on Sunday.

Soon after the news of the building's collapse started spreading to the outside world, the South African high commission in Nigeria began receiving frantic calls from people wanting to know if their relatives were among those affected.

The high commissioner, Louis Mnguni, had already sent out a team of diplomats from his Lagos office to the site. They were told that there were no indications of South Africans being involved, even though there were at least 349 South Africans on pilgrimage to the church.

The information was sketchy and the Nigerians ignored offers by South Africa to send a rescue mission.

By Saturday mid-afternoon Mayekiso had been working a 26-hour shift to treat survivors.

By 3.30am on Saturday, she had counted eight bodies.

Meanwhile, South African diplomatic staff continued to hang around the compound, frantically searching for facts. They were denied access and could not get any information out of the church or the authorities.

South African relatives continued to make frantic calls to Nigeria, desperate for information about their loved ones. They hit a blank wall.

Back in South Africa, International Relations Minister Maite Nkoana-Mashabane called the Nigerian high commissioner in South Africa, Sunday Yusuf, to offer assistance. Her intervention did little to improve the situation.

Two days after the collapse Joshua commented on the disaster during one of his sermons. He told the congregation he was visiting a place in "the mountains" in the morning and afterwards got a call about a plane hovering above the mountain and, moments later, over the church in Lagos.

Four South African survivors told their stories. Shadrack Mamzini said he took pictures of the aircraft. The other three men told of being trapped in the collapsed building and only being saved because they kept praying to God.

Joshua said: "They were trying to scare you from coming to this church. Don't be scared, you are not the target, I am the target. I know my hour has not yet come."

Shortly after the service, Joshua held a press conference with Nigerian journalists.

One journalist, Nicholas Ibekwe from the Premier Times, accused Joshua of offering reporters a N50000 (about R3300) bribe at the press conference to write positively about his church after the disaster.

Meanwhile, Search and Rescue South Africa was placed on standby by the Department of International Relations.

Ian Scher from Search and Rescue SA said: "A rescue like this requires at least 50 people including technical rescue staff, doctors, paramedics and sniffer dogs. At least 30 tons of equipment would be needed.

"But we didn't go. It's crucial to get in there within the first 24 hours ... it's easy to deduce that they didn't want our help.

"It's common knowledge that our team is the only one in sub-Saharan Africa with the resources to carry out this rescue."

In Lagos, the Nigerian Emergency Management Agency's Farinloye said local rescuers were only allowed to carry out full rescue operations after Lagos state governor Babatunde Fashola met Joshua at the disaster site on Sunday and threatened to take over the site.

Mnguni, South Africa's high commissioner, was still trying to get hold of Nigerian authorities with no luck.

The church announced that nine people had died and 137 had been injured.

Mayekiso headed to mortuaries and hospitals in the hope of trying to identify the dead and wounded, but was turned away at two mortuaries - one private, the other government - "for no good reason".

Mnguni sent a note verbale - a diplomatic communication - to Nigeria's chief of protocol, asking for details about injured or killed South Africans and offered help. There was no response for several hours.

Later that evening, Mnguni called the chief of protocol who said he had not seen the note as he was on leave that weekend.

The church announces 44 dead. No nationalities are mentioned.

The church put the death toll at 49. It still gave no detail of nationalities.

News began to emerge of the scale of the catastrophe.

Imtiaz Sooliman and his Gift of the Givers teams were on standby to go to Nigeria if there was a call for assistance. The call for help never arrived.

Meanwhile, in Lagos, Sheik Mohammed Jamie, a Nigerian affiliated with Gift of Givers, had been helping to track down injured South Africans at hospitals around the city.

He was chased away from the Avon Healthcare Hospital. "They wouldn't let me talk to anyone, even for two minutes. We just wanted to get names of who they were treating," he said.

On the diplomatic front, things started moving. For the first time, South Africa had access to the church compound and information.

Senior ministers, including minister in the Presidency Jeff Radebe and Nkoana-Mashabane convened an "emergency meeting" with Zuma to discuss the Lagos disaster.

Zuma announced on television that 67 South Africans had died in the Lagos collapse.

There was still no communication between the two heads of state. No official figures were released by the Nigerians.

Zuma's announcement set off a minor diplomatic row, as the Nigerians claimed the nationality of the victims could not be confirmed.

A senior government official close to the process said Zuma had not spoken to Nigeria's President Goodluck Jonathan since the incident happened.

"You would expect when so many people have died you would expect a statement from the Nigerians but that did not happen. That just shows the frosty relationship towards South Africa."

At Johannesburg's OR Tambo airport, desperate relatives waited for news of loved ones. Reports from Lagos officials suggested hospital authorities were banning wounded survivors from phoning their loved ones. Their passports had been taken upon their arrival at the church.

More details of the horror began to emerge. Thobile Baku described to an eNCA television crew the terror of being trapped in the dark under the rubble.

"When I was in the serving area and I looked up to the ceiling I saw the slab coming down and I ran in the opposite direction. I dived because the slab hit me on the head and after that it was dark inside and I couldn't see anything. It was becoming hotter and hotter ... there was no oxygen ... and we were praying."

South African Lindiwe Ndwandwe was pulled out of the rubble. She had drunk her own urine for five days to stay alive.

Reports emerged of some family members who were not being allowed into Lagos's morgues to search for relatives.

Sooliman from the Gift of the Givers made an urgent plea on South African radio to track down the family of a four-year-old survivor. Zama Mthethwa was found alive and being cared for at the church compound, as was her sister 18-month-old Siphelele Mthethwa. The fate of their parents is unknown.

Attempts to track down survivors at the church's compound remained difficult.

"The church guys are very obstructive and uncooperative," Sooliman told the media.

It was announced that the South African death toll had risen to 84. For the first time since the disaster, President Jonathan sent his condolences to Joshua and Zuma. There was still no official statement from the Nigerian government about the tragedy.

More than seven days after the building collapsed, Jonathan toured the crash site, flanked by Joshua and surrounded by massive security, and offered his messages of condolence to the victims, particularly South Africans.

To make matters worse, the grieving families will have to wait weeks before they can bury their dead as most of the bodies are unrecognisable as a result of the collapse and will require DNA testing.