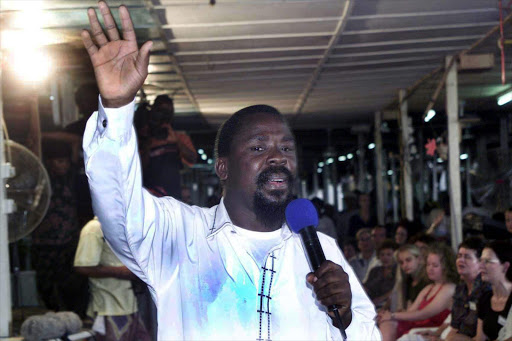 The trustees of TB Joshua’s Church of all Nations (SCOAN) were on Monday reportedly set to be charged over a building collapse that killed at least 116 people on September 12, 2014.

81 of the victims were South Africans.

According to Premium Times, the trustees, of whom TB Joshua is one, would be arraigned before the Lagos State High Court in Ikeja.

They would be prosecuted alongside the engineers who constructed the collapsed six-storey building, the report said.

A Vanguard report said Justice Ibrahim Buba of the Federal High Court in Lagos had dismissed suits filed by the engineers - Oladele Ogundeji and Akinbela Fatiregun - to stop their planned trial.

The engineers had filed two separate suits before Justice Buba seeking an order restraining the police from inviting, arresting or prosecuting them over the victims’ death, the report said.

An inquest called earlier this year to determine the circumstances and causes of the collapse attributed it to structural failures and said the church should be prosecuted as the guesthouse did not have planning permission.

However, the engineers described the coroner’s verdict as "unreasonable, one-sided and biased".

Most of the victims of the collapse were South African.