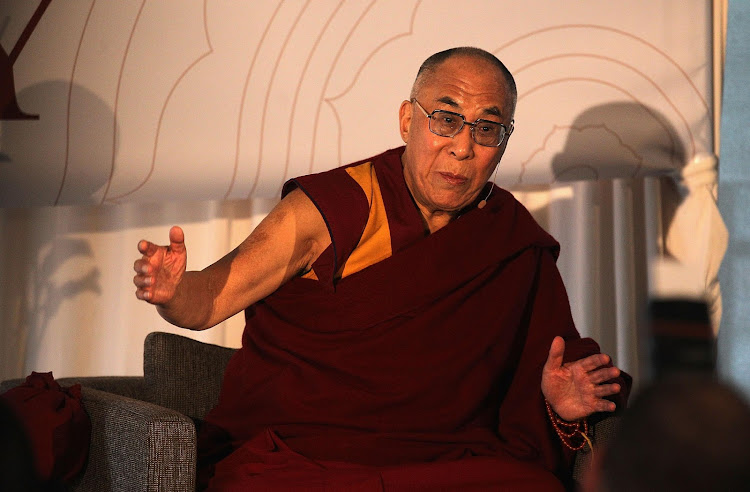 His Holiness the Dalai Lama speaks to the media during a press conference at the Hitlon Hotel South Wharf in Melbourne, Australia.
Image: Hamish Blair

Vusi Mahlasela is the only actual musician taking part, but when the Dalai Lama takes the stage at a three-day event in Botswana next month it's going to be like a rock concert.

That's the view of Pretoria neuroscientist Karen Fitzgerald, one of the organisers of the "dialogue" that will bring together the Tibetan Buddhist leader and African luminaries in an international celebration of ubuntu.

Others participating in the event in Gaborone from August17 to 19 include Graca Machel, Professor Pumla Gobodo-Madikizela of Stellenbosch University, who served on the Truth and Reconciliation Commission, and actor-writer Donald Molosi.

"It's a beautiful thing, it's going to be awesome," said Fitzgerald, who has long been associated with the US-based Mind and Life Institute, which is sponsoring the dialogue.

The institute seeks to promote collaboration between "contemplative practice", such as Buddhism, and scientists.

"In a time when so much goes wrong, it will be a moment when everything goes right, a moment to celebrate what humans can be," Fitzgerald said.

"The Dalai Lama said Africa needs only one thing, it needs pride in itself."

Africa has something very important to share in ubuntu

Donald Cottreau, a spokesman for the Mind and Life Institute, said Botswana was "gracious in its willingness to open its doors to the Dalai Lama".

Several attempts by the Dalai Lama, who won the Nobel Peace Prize in 1989, to obtain a visa for South Africa have been rejected in recent years for fear that China would be offended.

Cottreau said: "Africa has something very important to share with the world in ubuntu and the Dalai Lama wants to participate in the process of understanding and sharing that important wisdom."

The Dalai Lama said he had learnt about ubuntu - "I am, because you are" - from "my dear friend Archbishop Desmond Tutu".

"This resonates powerfully with the ancient Indian idea of interdependence. I hope to gain a clearer understanding of this idea and explore ways in which it may help promote compassion and understanding in our world."

The event will be opened by Botswana President Ian Khama, and Mahlasela will perform on the final day.

"Remember in the 1970s we used to drive up to Zimbabwe and Botswana and wherever for rock concerts.and now we're going to drive up to Botswana for another," Fitzgerald said.

The tone of the dialogue would be accessible to anyone, she said.

"People think that you have to be like really clever, or a Buddhist, or a scientist, or a doctor, or a professor to go; it's not that. You just have to be a human being to go. This is going to be a once-in-a-lifetime opportunity."

Gobodo-Madikizela who, in the years since the TRC hearings has focused on issues of forgiveness and trauma, said ubuntu had "become a bit of a swear word in certain circles" - a reference to those who now criticise Tutu and Nelson Mandela for having been too lenient on South Africa's former apartheid rulers after 1994.

Instead of pouring scorn on their vision, using the TRC experience to push the frontiers of understanding "would be a bold and radical act of decolonising knowledge", she said.