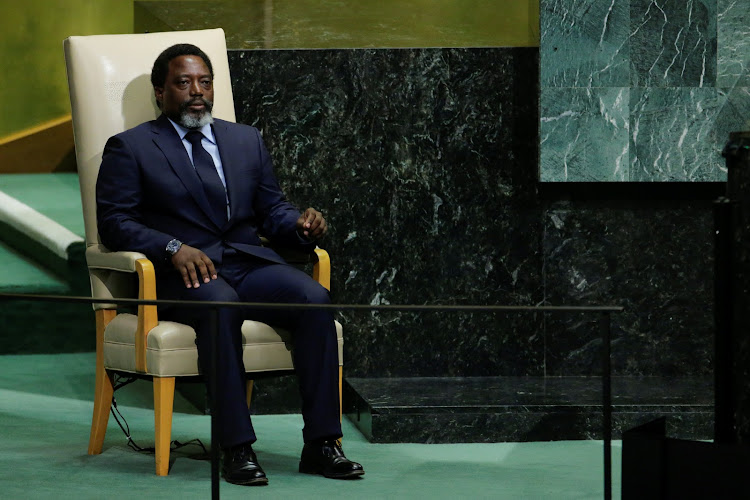 Joseph Kabila, President of the Democratic Republic of the Congo.
Image: Reuters

For years, William Yakutumba did what many militia leaders in eastern Congo do: he occupied a pocket of territory while running rackets based on gold smuggling, arms trafficking and taxing civilians abandoned by an absent state.

Since June, however, his men have engaged in a hit-and-run insurgency against the army. Last week, in a dramatic escalation, they attacked the lakeside town of Uvira from surrounding hills and by motorised pirogue from Lake Tanganyika.

Yakutumba, who fought alongside the army against Rwandan troops in earlier wars, is spearheading an attempt to unify disparate eastern rebel factions into a force that can oust President Joseph Kabila, who refused to step down when his second and final term in office expired last year.

This marks the most serious effort by a militia leader in Congo's lawless east to combine insurgent groups since Kabila refused to quit power, raising the spectre of generalised conflict along the lines of the Congolese wars of the 1990s, which killed millions of people.

Yakutumba and his rebels are counting on widespread, growing frustration at Kabila's reluctance to step aside and delays to an election to succeed him.

Should the insurrection gain strength, it could stretch both the army, whose ill-disciplined and unmotivated troops already face a proliferation of security threats across the east and centre of the country, and a U.N. peacekeeping mission, which backs them but faces cuts of its own.

Political opponents of Kabila also fear his camp will cite fresh fighting as justification for further delays in fulfilling a pledge of holding elections, as it has in the past - which could further fuel the anger.

Yakutumba, long opposed to the Kabila government, which he views as beholden to foreign powers, released a "declaration of war" last week that accused Kabila violating the constitution.

"We ... have chosen the military option as the way to chase the dictator Joseph Kabila from power," Yakutumba said in an audio recording released on social media that was peppered with references to Martin Luther King Jr and accused the government of corruption and mismanagement of the nation's natural resources.

At a time when Congo is meant to be seeing its first peaceful transition of power, the attack on Uvira, a trading town near the border with Burundi, marked a new insurgent front in the eastern borderlands.

The mineral-rich region is a tinderbox of ethnic tensions and for more than two decades have been racked by conflict. It is the world's biggest source of coltan, used in mobile phones and other electronic products.

"People are genuinely worried," a senior security source told Reuters about Congolese and U.N. officials. "At one point the Congolese army completely collapsed. They have moved some reinforcements in but it is very fragile."

The deputy commander of the U.N. force was dispatched to Uvira to rally U.N troops and encourage the army to stand and fight. Congo has also dispatched its top general, Didier Etumba, to the front.

During a stopover on Thursday in the eastern city of Goma, Etumba downplayed the rebel threat. "It's a flash in the pan and we're going to put it out," he told reporters at the airport.

Having fought for the Mai Mai self-defence militia in the 1998-2003 war, Yakutumba did not integrate into the army, instead establishing himself as a warlord, gold smuggler and arms trafficker in South Kivu's Fizi territory. Over the years, he cultivated ties with local politicians and foreign rebels.

His uprising began in June with an attack on an army base in Fizi that killed dozens of soldiers and forced tens of thousands of civilians to flee their homes. The attack, on Congo's Independence Day, gave birth to a new group – the National People's Coalition for the Sovereignty of Congo (CNPSC).

Since then, recordings have spread on social media with some fighters saying they are part of a wider umbrella rebel movement called Alliance of Article 64 (AA64) that includes CNPSC. The name is a reference to the article in Congo's constitution that says all citizens have the duty to oppose anyone who holds on to power in violation of the constitution.

However estimates among security sources for the number of CNPSC fighters involved in the rebellion remain low, at 300-450, and it is not clear how much coordination there is with other rebel factions.

The success of previous Congolese insurgencies has also largely depended on interventions by Congo's neighbours. One foreign military expert said there was no sign of foreign support at present.

Nevertheless, local militia believed to be aligned with Yakutumba have exploited the army's weakness to expand into neighbouring Maniema province, where they have clashed with the army and forced the shutdown of a major gold mine.

Yakutumba has been particularly bold in attacking Uvira, a major population centre, "implying morale was high and a certain level of supplies assured", said Judith Verweijen, a researcher who specialises in eastern Congo at Belgium's Ghent University.

The U.N. force in Congo is under pressure to fight, whether or not Congolese forces hold the line, after failing to halt advances on Goma which seized by rebels in 2012.

But the latest rebellion coincides with major cuts to troops and hardware imposed on U.N. peacekeeping missions around the world.

Meanwhile, a conflict in Congo's Kasai region – which has displaced 1.4 million people in a year – and the prospect of election-related violence, especially in Kinshasa, means some troops are being redeployed from east to west.