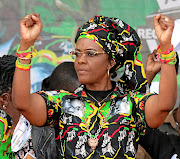 Zimbabwe's First Lady Grace Mugabe appears bent on making South Africa her second home‚ having acquired assets worth at least R70-million in a space of six months‚ despite plans to use the properties to leverage a civil lawsuit in an assault case.

The car was paid for in cash and sources say it will be her official car when she is in the country. "That car is armoured and the best in the Rolls range‚ in terms of comfort. She will be using it here (South Africa) because back home she uses state-owned Mercedes-Benz cars‚" said a source close to her dealings.

Her son Russell Goreraza last month acquired two Rolls-Royce cars and his mother's car was bought from the same dealership a week later.

Another source said Mugabe decided to keep the car in South Africa to avoid bad press at home.

"When her son and a colleague imported two Rolls-Royce Wraith cars into Zimbabwe duty-free‚ there was a backlash that even spilled into parliament‚ with opposition politicians saying it was spending of state funds in reckless abandon‚ and not paying duty for the cars demonstrated abuse of power. That's why she decided to keep the car in South Africa as part of her property there‚" said the source.

The Zimbabwe Independent last week reported that the car is black with a white interior and was paid for in cash. It was reportedly yet to be collected and registered as a South African vehicle.

"Grace sent someone to pay R5.8-million in cash for the car‚ a Rolls-Royce 2017 Ghost model. The car is currently parked in the basement of Rolls-Royce Motor Cars‚" the paper quoted a source.

Sources say one of Mugabe's Sandhurst houses is undergoing renovations.

"When renovations are finished‚ the property would be one of the most luxurious homes and most secure in the area‚" the source said.

Her spokesperson Olga Bungu was not available for comment.

Meanwhile‚ President Robert Mugabe is in South Africa for the South Africa-Zimbabwe Bi-National Commission (BNC) in Pretoria but his wife didn't make the trip to South Africa‚ avoiding a sideshow linked to her assault of model Gabriella Engels in August.