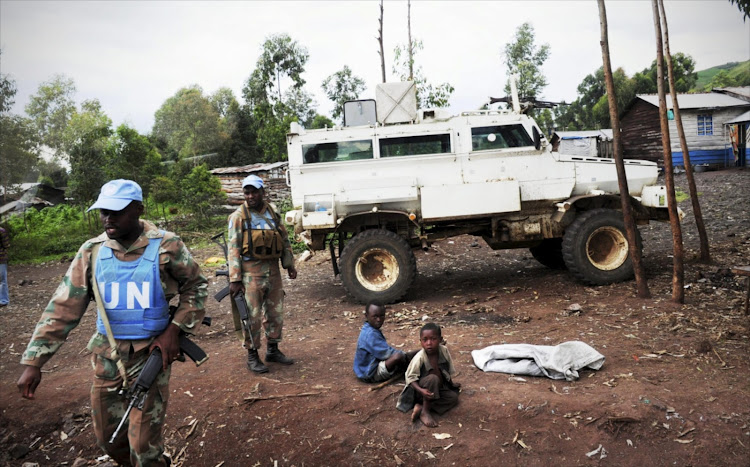 The fighting, which began this weekend, is a fresh outbreak of violence for a region plagued by ethnic tensions and massacres that killed more than 800 people between 2014-2016.
Image: Gallo Images / City Press / Leon Sadiki/File photo

Militants attacked two military bases in northeastern Democratic Republic of Congo on Monday, killing a UN peacekeeper and injuring a dozen others, the UN mission and the army said.

The mission, known as MONUSCO, said it had deployed attack helicopters in response to the raid, and local sources said the army was battling militants along the main road leading from North Kivu province's Beni territory to the Uganda border.

The fighting, which began this weekend, is a fresh outbreak of violence for a region plagued by ethnic tensions and massacres that killed more than 800 people between 2014-2016.

"I can confirm an attack on the MONUSCO base at Mamundioma this morning which killed one peacekeeper and injured 12," said the spokeswoman for the UN.'s Congo mission Florence Marchal, referring to a village near the city of Beni.

Army spokesman Mak Hazukay said the attacks were carried out simultaneously and blamed the Allied Democratic Forces (ADF), a Ugandan Islamist group active near the border between Congo and Uganda, for the attacks. He said the U.N. base houses Tanzanian peacekeepers that formed part of an intervention brigade which has a mandate to conduct offensive operations against militants.

ADF is believed by authorities to have ambushed and killed many civilians nearby this weekend after a lull in attacks against civilians near Beni this year.

Omar Kavota, who leads an organisation that monitors violence in North Kivu, said ADF fighters killed at least three civilians on Saturday by slitting their throats and took another 19 hostages, citing testimony by other captives who were released or managed to escape.

Congolese authorities have blamed the ADF for nearly all the massacres between 2014-2016. However, independent and U.N. experts say several armed groups as well as national army commanders have been involved.