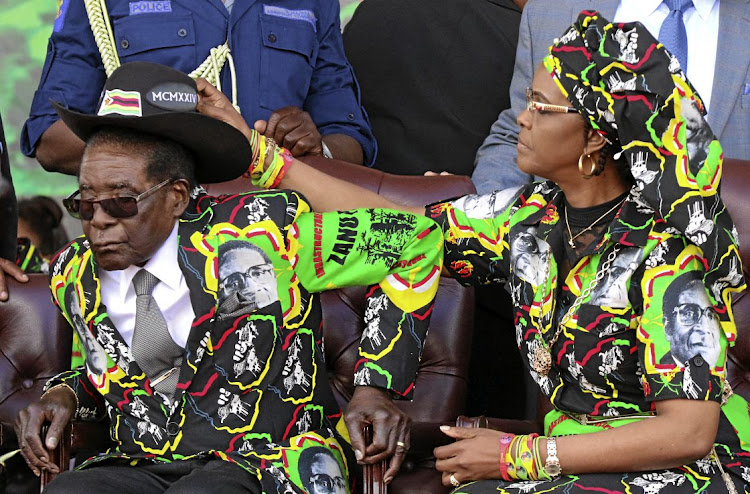 President Robert Mugabe and his wife Grace at a rally of his ruling Zanu-PF in Chinhoyi, Zimbabwe,
Image: Philimon Bulawayo/Reuters

The war veterans fell out with Mugabe in July 2016‚ saying they had been sidelined. It was a shift in relations from the time when the veterans embarked on farm invasions 17 years ago‚ and provided a pivot for Mugabe’s rule.

Mutsvangwa expressed delight‚ in an exclusive interview with the Sunday Times‚ at the military intervention that appeared to usher in an end to Mugabe’s 37-year rule‚ cut off Grace Mugabe’s presidential ambitions and deal a decisive blow to a party faction‚ known as G40‚ aligned to the First Family.

“We are obviously delighted with the steps which our army took in correction of a situation where there was executive capture‚ where state house was being captured by a coterie of young upstarts‚” Mutsvangwa said.

“They were using [Mugabe’s] wife‚ who is clinically mad‚ and anyone can see that. She has done outrageous things in South Africa of recent [sic]… this woman now thinks she can aspire to be president of the country because of her husband. A collection of utterly useless and incompetent criminal-minded young men had now accosted and asserted themselves with this woman‚ so that they could take power.”

Mugabe faces a call from the Zanu-PF’s 10 national provinces to step down as head of state and leader of the party over “incapacitation” due to his advanced age. It marks a bitter end for the 93-year-old ruler who‚ in recent years‚ had developed a knack of firing rivals from government and the party.

Last month‚ he fired several cabinet ministers and was on the warpath against perceived allies of former vice president and long-time ally‚ Emmerson Mnangagwa.

It was this purge against party members that saw army general Constantino Chiwenga and the military step in‚ to avoid the party’s instability spilling over to threaten the country’s interests.

“The army stepped in to correct that situation‚ so I am very happy‚ and we feel that we must now take the task from where the army left it. They have done their job. It’s a correction‚ but beyond that‚ the task belongs to the country‚ to deal with this unsavoury situation which has developed. We as the war veterans are happy that everyone is now on the same page‚” Mutsvangwa said.

A string of resignations by those close to Mugabe is expected‚ should he step down or be ousted.

Mutsvangwa said that Mugabe had become senile and had forfeited his role as head of state to his wife.

“All this is because [Mugabe] is doting [on] a mad woman‚ who in turn doesn’t want to change her physical address even if her husband dies. That physical address‚ State House – you go there because you are voted into power. She went there by marriage‚ and now she doesn’t want to leave the place. Even if the marriage certificate disappears with the death of her husband‚ she still wants to remain at State House‚” he said.

“She is using every crook hanging on to her senile husband to abuse every rule in the country‚ within the political party and everywhere‚ to make sure that she doesn’t change her address. This is madness – that a country that aspires to be democratic‚ that somebody now says simply; ‘Because my marriage certificate took me to State House‚ I should not leave State House.’ This is unacceptable‚ and this is why we are very happy with what has happened.”

Although Grace Mugabe’s political career was short-lived‚ lasting just three years‚ its impact is likely to reverberate for years‚ as the country seeks to chart a new course.

WATCH | 'Wrong' or 'long' - listen to Mugabe's speech and decide

Zimbabwean President Robert Mugabe was expected to announce his resignation on Sunday night‚ but instead he made a long speech in which he called for ...
News
4 years ago

Zimbabwean President Robert Mugabe's youngest son has taken to social media to praise his father‚ claiming that the ruling party could not survive ...
News
4 years ago

Just before Zimbabwean President Robert Mugabe made his first public address on Sunday night since the military took over‚ one of the generals who ...
News
4 years ago