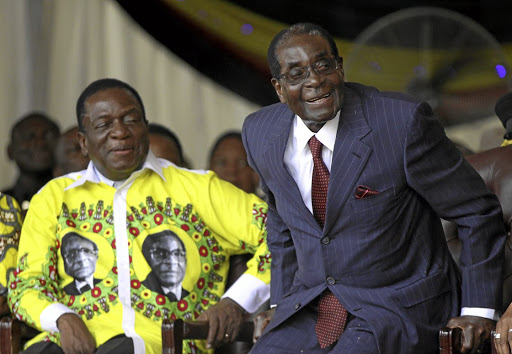 Robert Mugabe with his former deputy Emmerson Mnangagwa, with whom he once shared an extremely close relationship.
Image: Reuters

A Zimbabwean activist believes Emmerson Mnangagwa cannot steer the country in the direction of rebuilding the nation.

Addressing a media conference in Braamfontein‚ Johannesburg‚ ahead of Mnangagwa's swearing in as interim president of Zimbabwe after Robert Mugabe’s resignation after 37 years in power‚ Maureen Kademaunga suggested that Mnangagwa needed to address the sins of his past.

"The president who is coming in‚ Mnangagwa‚ he was the chief architect of the Matebeleland Massacre in the 80s and I don't see how he will be able to facilitate a process of national healing and reconciliation when he is also one of the perpetrators‚" said Kademaunga. During the massacre‚ thousands of people were tortured and murdered while women were raped in the army-led clampdown.

Mnangagwa‚ who served as Mugabe’s vice president‚ was recently axed by the now former president.

Mugabe was reportedly pushing for his wife‚ Grace‚ to replace Mnangagwa.

Kademaunga said Zimbabweans should not be fooled into thinking Mugabe was the only one to blame for decades of problems in the country.

"The people who are in the government and the military who have committed atrocities and who have been corrupt must also be brought to book but I think because they are focusing on personalities and taking down the man and trying to cleanse themselves in the process and making Mugabe the scapegoat‚" said Kademaunga.

"So we still need to challenge the system and make sure that it does not just go against one man and his wife‚” she said.

Mnangagwa‚ who was out of the country for the last several days‚ is expected back to assume his role as interim president. Zimbabwe is expected to hold fresh elections next year.

Events that led to Mugabe's resignation

Former President of Zimbabwe Robert Mugabe resigned as the head of state on Tuesday. Here are the events that led to him taking the decision to step ...
News
4 years ago

SA's henchpuppets are waking up and smelling the coffee

What should African leaders learn from the fall of Robert Mugabe? For ANC Speaker and Deputy Enabler-General‚ Baleka Mbete‚ the answer is dark and ...
Ideas
4 years ago

Zimbabwe's Mnangagwa to be sworn in as president on Friday

Zimbabwe's former vice president Emmerson Mnangagwa will be sworn in as president on Friday following the resignation of Robert Mugabe after nearly ...
News
4 years ago