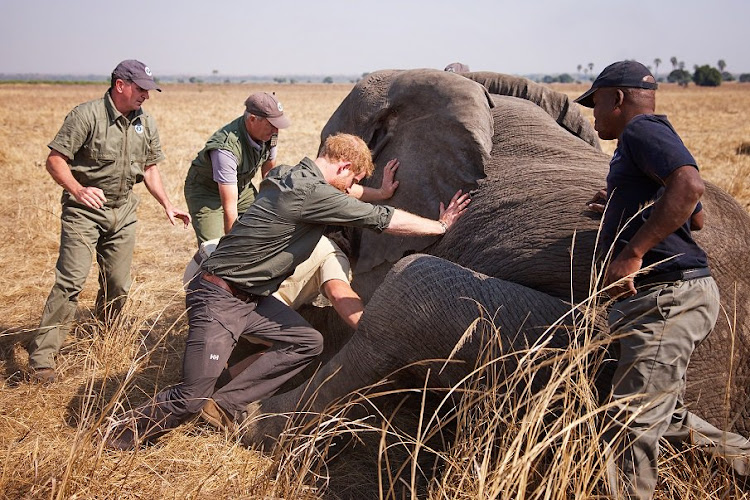 Prince Harry has worked with African Parks for a number of years and has a deep personal interest in frontline conservation projects that work to protect Africa's natural heritage and support both wildlife and local communities.
Image: Twitter/Kensington Palace

He joins his brother Prince William who is working to ensure the survival of elephants through the Tusk Trust amongst other wildlife initiatives.

In an interview broadcast in the UK today‚ Prince Harry expressed his support for various environmental causes‚ saying: "Coming from a younger generation it is incredibly exciting and I feel optimistic about the future because now is a real test for‚ a real test for humanity to be able to swing that pendulum and say right in order for us to make our mark on this planet."

His father the Prince of Wales said: "We have somehow abandoned our proper connection with nature. Somehow imagined that we can manage without or we battle against her in every way instead of understanding that the future lies in working in far greater harmony with nature."

Official engagement photographs of Prince Harry and Meghan Markle have been released by Kensington Palace on social media ... and they are stunning!
Lifestyle
4 years ago

African Parks is a conservation NGO‚ founded in 2000‚ that manages national parks and protected areas on behalf of governments and in collaboration with local communities across Africa. With 13 parks under management‚ they say they have the largest area under conservation for any one NGO on the African continent.

“We are extremely honoured to have Prince Harry officially join African Parks as our President‚” Peter Fearnhead‚ CEO of African Parks‚ said on Wednesday.

“Prince Harry has had a long history supporting conservation and humanitarian efforts across Africa. He is extremely passionate‚ committed and knowledgeable about the issues‚ and is a force for conservation not just for Africa but for the world. He shares in our vision‚ and together‚ with him in this influential role‚ we aim to continue to do extraordinary things for the benefit of Africa’s wildlife and the people who live in and around these wild areas.”

Prince Harry’s first experience working alongside African Parks was in July 2016 in Malawi‚ where he served as an integral member of their team‚ carrying out one of the largest elephant translocations in history. Along with moving elephants to a new home‚ Prince Harry assisted with translocating a rhinoceros‚ a host of game species including antelope‚ buffalo‚ and zebra‚ and he facilitated in re-collaring three lions with GPS collars to help better protect them.

Why Black Twitter can't get enough of Britain's next royal

Meghan Markle and Prince Harry are not about to unite the world and end racism with their engagement, but it's a much-needed piece of good news
Lifestyle
4 years ago

The organisation said in a statement that together with Fearnhead‚ he also met with Malawi’s President Peter Mutharika to discuss the Presidents’ conservation vision for the country‚ as well as the work of African Parks‚ who manages three parks in Malawi and is responsible for protecting 90% of the country’s elephant population.

“In his role as President of African Parks‚” said Robert-Jan van Ogtrop‚ chairman of African Parks‚ “Prince Harry will work closely with our Board and Peter Fearnhead our CEO‚ to advance our mission in protecting Africa’s national parks. He’ll be able to help shine a light on the most pressing and urgent issues wildlife are facing‚ and most importantly‚ what people can do to help.”