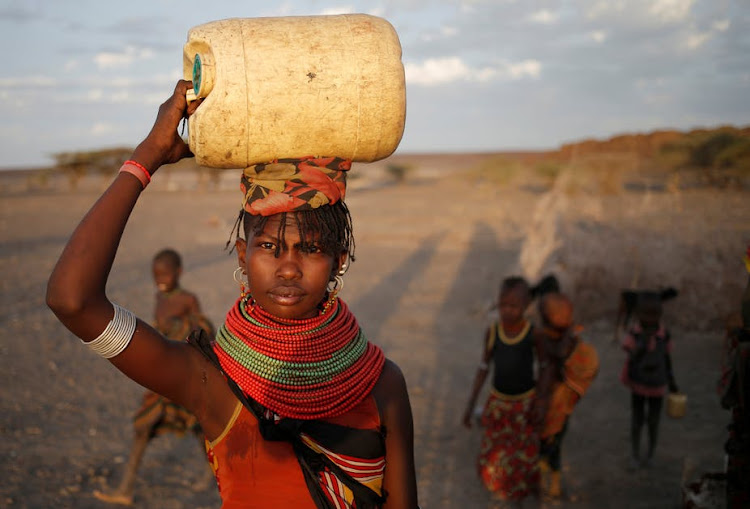 A woman carries a water canister in a village near Loiyangalani, Kenya.
Image: Reuters/Goran Tomasevic

The world has made tremendous progress in bridging the gap between water supply and demand. But there’s a long way still to go. In a 2017 joint monitoring report UNICEF and the World Health Organisation noted that more than 844 million people – many of them in sub-Saharan Africa – still don’t have access to improved and safely managed drinking water sources.

This is particularly true in the region’s urban areas, and especially its informal settlements. Population growth and rapid urbanisation are outstripping the already inadequate infrastructure in these spaces.

The traditional model of water governance through state or public water utilities, and the market based privatisation of water supplies that gained momentum in the early twentieth century, have failed to effectively address growing urban water demand. And so other institutional and management systems have emerged in some urban and peri-urban areas.

The Cape’s water crisis is inconvenient for humans‚ but for wild animals it is potentially lethal.
News
4 years ago

My colleagues and I explored several of the new systems in recently published research.

Community based water supply models have been common in rural areas for some time. They are now appearing in urban contexts for several reasons. These include communities’ desire to address everyday water challenges when public utilities fail to deliver.

Community public partnerships typically involve a community – or an elected body within that community – working with a public or state owned water utility. So far they’ve emerged in only a handful of countries in sub-Saharan Africa, notably Ghana, Malawi, Tanzania and Zambia. There are also successful examples of community-state partnerships in Latin America. These are mainly in Bolivia, Mexico, and Chile.

These existing initiatives offer useful lessons on what can be achieved when communities work jointly with the state in water service delivery.

Water boards in Malawi started working with community-elected water user associations in informal settlements in the mid-2000s. This began after a long history of mismanagement by private water operators. The water boards struggled with everything from financial management to extending water connections. Water points were frequently vandalised. The utility routinely ignored complaints from the community.

There have been significant gains since the community public partnerships were established. Technical and financial management have improved. Systems have been put in place that allow residents to gradually pay off their outstanding debts rather than just cutting off their supply. Money in the bank means there are more functional communal water kiosks. Broken pipes and other technical faults are handled more efficiently.

R6-billion to be spent to tackle drought

Government has set aside R6-billion to tackle the drought situation in the Western Cape‚ the Eastern Cape and the Northern Cape.
Business Times
4 years ago

Perhaps most crucially, water pricing has stabilised in the communities in Lilongwe and Blantyre that have adopted this model. People are no longer overcharged for this basic service.

The model has its problems, of course. Supply disruptions and low water pressure are common. Questions have been raised about the extent to which improvements in management, accountability, and the number of water points has led to better water access at the household level. More empirical work will be needed to quantify the relationship between these partnerships and household water access.

Self-help initiatives are historically more common in rural areas. But they are gradually emerging in some of sub-Saharan Africa’s urban spaces. These arrangements, also known as community-based self-provision, allow communities to form their own institutions for water delivery without formal connections or partnerships with utility operators or municipal governments.

Such initiatives tend to be smaller in scope than formal utility–community partnerships. They often operate in small towns, with examples to be found in Cameroon, Ethiopia, Ghana, Kenya, Tanzania and Zambia. Self-help arrangements may involve either an entire community or a subset, such as an elected committee. Communities show commitment by providing resources such as land, labour, or money.

The Kumbo and Mutengene in Cameroon is a self-help initiative that’s enabled communities to significantly mobilise financial and other resources. It has created a platform for communities to set up their own partnerships with development agencies. This is important: such initiatives must be able to attract international donors’ interest by first mobilising community members and resources if they’re to thrive.

In Dar es Salaam, for instance, communities far from the city’s main water infrastructure network came together to dig wells and boreholes. They purchased water pumps, constructed storage tanks to meet their own water needs, and used revenue from water sales to expand the small-scale water system. Successful communities were able to get both local and international donors on board to provide them financial support.

Community self-help initiatives are not without their flaws. Their viability depends on the extent of community participation, continued interest and engagement with NGOs and other stakeholders; and sufficient financial support from within or outside the community. This prompts questions about their future sustainability and potential to scale up.

Our study and review of existing research shows that no single policy or institutional approach to urban water supply is perfect. Nor is there one approach without any merit.

What is clear is that emerging alternative arrangements that involve communities are critical for improving water access. This is especially true in low-income urban areas. But communities cannot do it all alone. They need institutional support and to operate within a strong, coherent policy landscape.

It's like going camping: Waterless toilets are the future in Cape Town

Peter Staley built his first composting bucket toilet under the stairs of his Victorian home in a posh London neighbourhood years ago, to the horror ...
News
4 years ago

Private hospitals are not taking any chances regarding Western Cape premier Helen Zille’s promise that water supplies will be maintained to their ...
News
4 years ago

A multi-course meal made without a drop of fresh water? Yes, it's possible

Up-do is my go-to style in the drought, says Helen Zille

Does she wash away social media smears when she bathes in a skottel with a waslap?
News
4 years ago