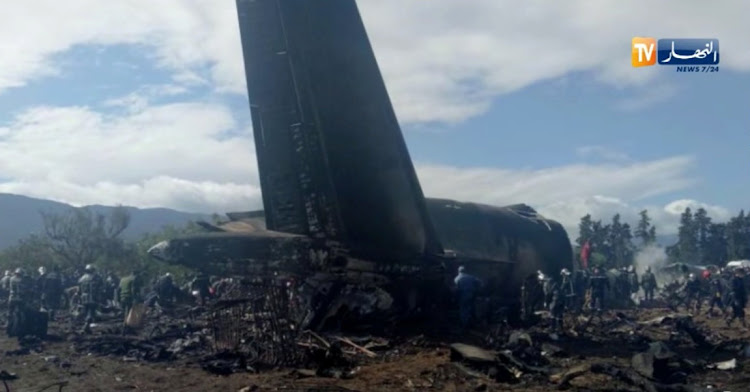 An Algerian military plane is seen after crashing near an airport in Algeria on April 11 2018 in this still image taken from a video.
Image: ENNAHAR TV/Handout/ via REUTERS

More than 250 people including members of Western Sahara’s Polisario independence movement were killed when a military plane crashed in a field outside Algeria’s capital on Wednesday, officials said.

Television footage showed crowds gathering around the smoking and flaming wreckage near Boufarik airport southwest of Algiers. A line of white body bags could be seen on the ground next to what media said was a Russian Ilyushin transport plane.

A total of 257 people died in the crash, state TV reported.

A member of Algeria’s ruling FLN party told the private Ennahar TV station the dead included 26 members of Polisario, an Algerian-backed group fighting for the independence of neighbouring Western Sahara – a territory also claimed by Morocco in a long-running dispute.

The plane was heading to Tindouf, an area on Algeria’s border with Western Sahara, but crashed on the airport’s perimeter, Algeria’s defence ministry said.

Tindouf is home to thousands of refugees from the Western Sahara standoff, many of them Polisario supporters.

U.N. attempts to broker a settlement have failed for years in the vast desert area, which has contested since 1975 when Spanish colonial powers left. Morocco claimed the territory while Polisario established its self-declared Sahrawi Arab Democratic Republic there.

Algeria’s defence ministry issued a statement expressing condolences to families of the victims.

More than 250 people including members of Western Sahara's Polisario independence movement were killed when a military plane crashed in a field outside Algeria's capital on April 11 2018 officials...

Algeria has suffered a string of military and civilian aviation disasters.

Two military planes collided mid-flight in December 2012 during a training exercise in Tlemcen, in the far west of the country, killing the pilots of both planes.

In February 2014, 77 people died when a military plane carrying army personnel and family members crashed between Tamanrasset in southern Algeria and the eastern city of Constantine.

Only one person survived after the C-130 Hercules transport aircraft came down in the mountainous Oum El Bouaghi region.

The defence ministry blamed that crash on bad weather.

An Air Algerie passenger plane flying from Burkina Faso to Algiers crashed in northern Mali in July 2014, killing all 116 people on board including 54 French nationals.

In October the same year, a military plane crashed in the south of the country during a training exercise, killing the two men on board.

That came more than a decade after all but one of the 103 people on an Air Algerie Boeing 737-200 died in March 2003 when it crashed on takeoff in the country’s south after an engine caught fire.

- Reuters, with additional reporting by AFP