Weaning African leaders off addiction to power is an ongoing struggle 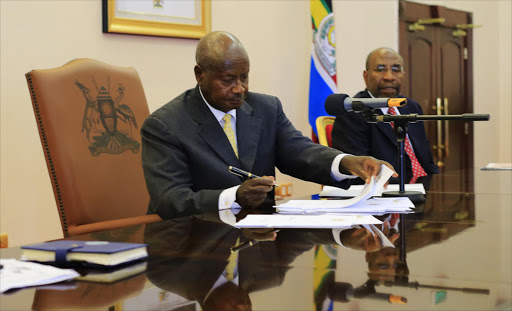 Some African countries have recorded democratic victories in the past 12 months. Ethiopia has a new leader whose ascent holds great promise for change, despite the country’s problematic 2015 election.

But elsewhere on the continent, leaders continue to disregard their countries’ own constitutions and laws governing presidential tenure. The Democratic Republic of Congo’s Joseph Kabila has been in power since 2001. He refuses to go even though he was meant to step down in December 2016. In Uganda, Yoweri Museveni has clung to power since 1986. Denis Sassou Nguesso has ruled Congo for almost 30 years.

Their refusal to step down at the appointed time flies in the face of several governance blueprints adopted as African countries shifted away from liberation politics to the new post independence struggle for democracy in the early 2000s.

The Organisation of African Unity was transformed into the African Union in 2001 with this shift in mind. The continent adopted progressive governance tools like the African Peer Review Mechanism. This was spearheaded by former Nigerian President Olusegun Obasanjo and South Africa’s Thabo Mbeki as a tool for African countries to review one another’s performance.

Numerous African countries adopted and agreed to uphold the terms of the African Union Charter on Democracy, Elections and Governance. It came into force in 2012 and was designed to guard against undemocratic governance.

These plans promised a great deal. They were designed to usher in good governance, democracy and security. It was hoped Africa’s image as a continent of ignorance, poverty, disease, misrule and corruption could be erased.

The rhetoric pointed in the right direction. But not all African leaders were willing to be swept by this wave of democratic reforms. Some are quite simply addicted to power, as shown by their reluctance – if not outright resistance – to leave at the end of their legal terms.

Leaders continuing to overstay their welcome undermines Africa’s attempts at overhauling its leadership and negates the noble intentions of the AU’s founders.

Term limits regulate leadership succession. They are meant to counteract leaders’ temptation to overstay their welcome. This helps to consolidate and legitimise democratically elected leadership.

Of course, they’re not enough. Regular transfer of power as seen in countries like Mauritius, Ghana, Botswana and Zambia, among others, cannot guarantee political and socio-economic stability. Other ingredients such as accountable, legitimate leadership are critical.

But regular transfers of power give citizens hope that new policies, programmes and approaches will be adopted by the new leadership. In turn, this could overturn numerous political, social, economic impacts of uninterrupted strangleholds on power in Africa.

The benefits of frequent power transfers are evident in African countries that have them, such as Senegal; Botswana and Mauritius. Incumbents are kept on their toes because there’s a real chance they can be removed from power if they fail to govern properly.

Term limits have recently become controversial and divisive. Some leaders have used dubious constitutional amendments to extend their stay in power. Usually, governing parties and their leaders almost exclusively pass such amendments with minimal or no opposition participation. That’s what happened in Rwanda, Uganda, Burundi and Congo Republic.

Similarly, despite constitutional provisions and regular elections, countries such as Angola, Togo, Cameroon and Equatorial Guinea are virtually de facto one party or one leader repressive states wherein resignation, retirement and term limits are meaningless.

Leaders have different reasons for refusing to leave office. In some countries, the answer lies in a lack of succession planning to transfer power. In others, leaders blatantly refuse to resign because of their despotic and kleptocratic tendencies. They abuse their states’ minerals, oil and money with their families and friends. Stepping aside would cost them these “benefits”.

For instance, the eventual departure of Angola’s Eduardo Dos Santos from office after decades in power has left his family exposed. His children stand accused of amassing billions during their father’s many terms.

Without strong constitutional safeguards and a democratic culture to counter the negative consequences of the “sins of incumbency” – as corruption associated with state power is often described by South Africa’s governing party, the African National Congress – can be menacing. It breeds “Big Men, Little People”, to borrow a phrase from the title of a book by journalist Alec Russel.