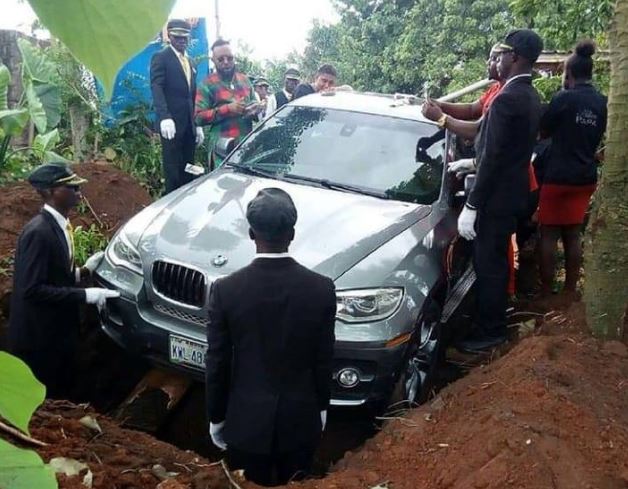 The pallbearers lower the brand new BMW into the grave as the family says their final goodbye to the patriarch.
Image: @theNETng via Twitter

A Nigerian man caused a stir on social media when he apparently buried his father in a brand-new BMW instead of a coffin in order to see him off in style.

The picture of the ceremony went viral on social media as pall bearers reportedly guided it down logs into position and then the logs were pulled out to allow the BMW to drop.

Niaj reported that the man, identified only as Azubuike, chose the luxury German car over the traditional coffin as a way to honour his late father.

Social media users were not convinced though. On Facebook, some people commented about how wasteful the funeral was, while others thought the car would not stay in the grave for very long.

Why didn't he buy him while he was still alive?? Show off njee, if I was the Dad ne ko mo pokela💀💀💀 I was gonna turn into *Leselo a ko rule' ko basong otle faah*

so silly, that 'coffin' was dug up hours later by thieves, and the body was probably just chucked back in a hole...shame

This is not the first bizarre funeral to have taken place. Sde.co.ke reports that in 2015 a man buried his mother in her favourite car: a Hummer.