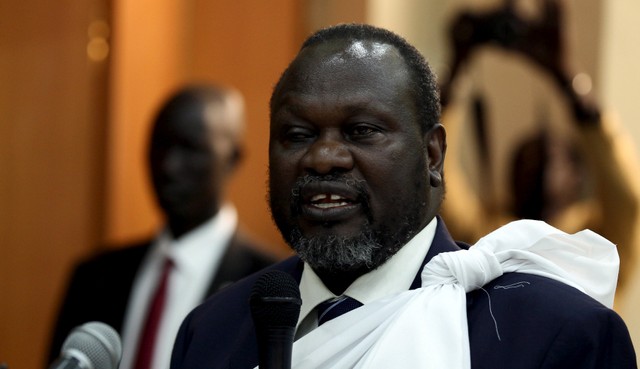 South Sudan's rebel leader Riek Machar arrived in Ethiopia on Wednesday for a meeting with South Sudan's President Salva Kiir, as part of talks to try to negotiate an end to a five-year-old civil war, a rebel spokesman and an Ethiopian official said.

“Yes, I can confirm to you that our chairman has arrived in Addis Ababa airport this morning," rebel spokesman Lam Paul Gabriel said, referring to Machar, who had been held under house arrest in South Africa since late 2016 after fleeing South Sudan.

An Ethiopian government official also confirmed Machar's arrival and said he would meet Ethiopia's prime minister, Abiy Ahmed, before his talks with Kiir.

Kiir and Machar are due to meet later on Wednesday. It will be the first between the two since a peace deal between the government and Machar's rebel group fell apart in August 2016.

Tens of thousands of people have been killed in the civil war that broke out in late 2013 when troops loyal to Machar, the former vice president of South Sudan, launched a rebellion against the government.

All sides in the now complex and multi-faceted war stand accused by the United Nations and other bodies of committing atrocities against civilians.

South Sudan President Salva Kiir has rejected opposition calls for him to resign as part of efforts to end a civil war, accusing anti-government ...
News
3 years ago

South Sudan is likely to return to famine within months, with 155,000 people likely to be in a catastrophic situation between May and July, a survey ...
News
3 years ago