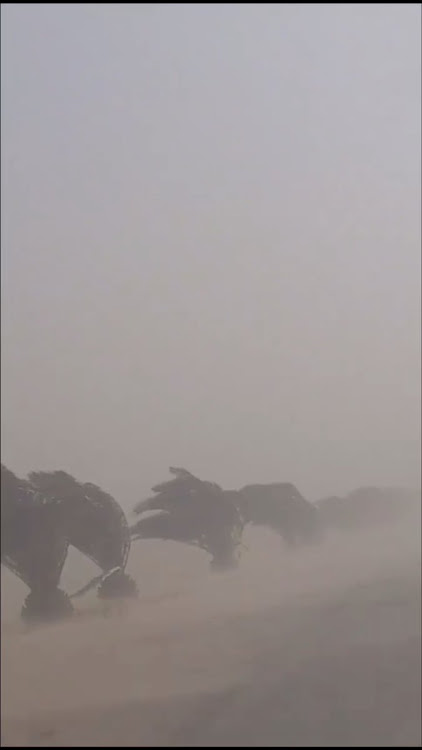 The current weather situation in South Africa was causing winds to blow across the Namib desert in Namibia resulting in sand storms in Walvis Bay.
Image: Twitter/@shaningwaF

If you are planning to go to Walvis Bay in Namibia on Thursday‚ be warned of very high temperatures and stand storms.

SA Weather Service forecaster Jan Vermeulen said the current weather situation in South Africa at the moment was causing winds to blow across the Namib desert in Namibia resulting in sand storms in Walvis Bay.

“What we are having now is that we have an intense high pressure system over South Africa… resulting in easterly winds over the Namibian coast - those strong winds that blow up the sand storms. We do also expect that tomorrow the winds could become about 45km/h to 50km/h or maybe even more which will blow up sand storms. They will be experienced in that area and will result in poor visibility in the storm‚” said Vermeulen.

One of the employees at the Port of Walvis Bay said the storm was intense earlier‚ forcing most people to stay indoors.

“It is a little better now… The wind was too much… In Walvis Bay we are used to sand storms at this time of the year. When it happens we stay indoors most of the time. If you were to walk outside it has to be with your eyes closed and it can be very hectic sometimes‚” she said.

Vermeulen explained how wind patterns in the area affect areas in the coast.

“Often we see that these easterly winds blow the sand right over into the ocean. You can even pick this up on satellite images. We do have a report of a sand storm in Walvis Bay. There was then a 50 knot wind there. The wind is still blowing as we speak. It can also become very hot. I can see that Walvis Bay is currently at 33 degrees Celsius.

Also, Incase you were wondering what it’s like in Walvisbay this morning. 🌬 pic.twitter.com/C4uPbDSV52

“There is still that easterly wind but the wind is now about 45km/h. It is hot because of the berg wind. That is the wind that blows from the plateau to the coast‚” he said.

Vermeulen said as the wind moves from the high plateau‚ it “warms up” causing temperatures to rise in the process.

He warned that high temperatures were also expected in Alexander Bay.

“We actually have a weather advisory for a heat wave for the Alexander Bay area until Monday.”

Vermeulen said that overnight‚ the wind usually dies but that it depends on weather conditions.

A cold front has blanketed the country and yet the tweeps on Twitter have shown once more that even when it is freezing, they have no chill.
News
3 years ago

Apart from the escalating fuel costs‚ impoverished Cape Town residents are struggling to keep warm because of a paraffin shortage.
News
3 years ago

It may be freezing outside but this is certainly not one of the coldest days that South Africa has had.
News
3 years ago