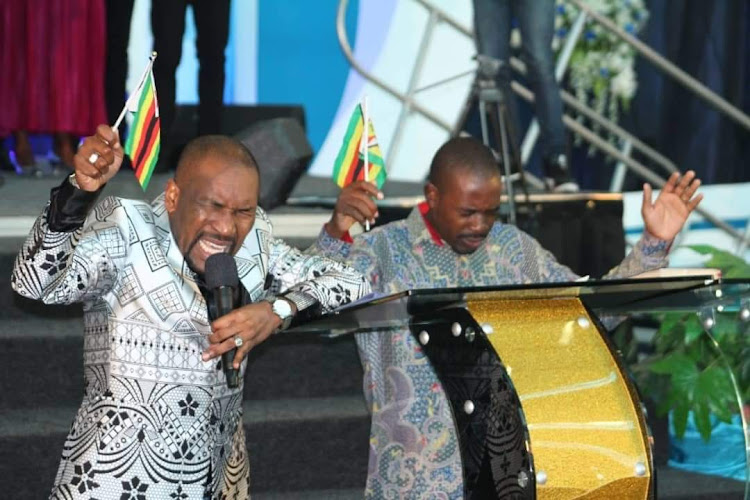 Blessing Chiza and Nelson Chamisa pray during a church service in Bulawayo on 22 July 2018
Image: SUPPLIED

The Movement for Democratic Change (MDC) Alliance has declared a week of prayer and fasting as it searches for a miracle to topple Zanu PF from power.

The alliance‚ according to Nelson Chamisa‚ will also on election eve hold an all-night prayer vigil. It will mark a grand finale to the weeks of fasting done by the MDC’s women’s league every Friday for him to win the election.

“This whole week‚ from Monday to Saturday‚ there is need for fasting. To all those who can fast‚ please do so and fast for your country. Then on Sunday‚ it should be a national day of prayer. We want to ensure a smooth cross-over‚” said Chamisa.

Given the large numbers of potential voters in churches‚ political observers said the church was “fertile hunting ground” for the presidential hopefuls. Zimbabwe is widely regarded a Christian nation and a national population census in 2012 indicated that at least 85 percent of its nearly 14-million population was Christian.

Eldred Masunungure‚ a political science professor at the University of Zimbabwe‚ said the church had a “decisive role” to play in the elections and this would likely come into sharper focus after voting day.

“The church has a role to play in convincing losers take to the courts rather than to the streets. For a long time it has played a secondary role and a marginal role in past elections‚ but it has a very critical role to play‚ possibly even a decisive role in helping to create a conducive election environment. Equally important will be its role after the election‚ either in July 30 poll or in the September 8 run-off‚” Masunungure said.

Zanu-PF goes into the upcoming general election in Zimbabwe as the party to beat - but a lot has happened since former president Robert Mugabe was ...
News
2 years ago

The closely contested election race entered its final stretch this week ahead of the July 30 polls. The final plans come in the backdrop of a survey released last week by Afrobarometer‚ which suggested that voting may go into a second round of polling.

The ruling Zanu PF is likely to secure 40% and the MDC Alliance 37% of the 5.6-million votes‚ according to the poll’s findings.

But this still has not stopped either of the two leading contestants‚ President Emmerson Mnangagwa and Chamisa‚ from canvassing for more votes.

Both leaders in recent weeks have turned to worshippers in the church for votes.

Mnangagwa‚ clad in white robes and holding a shepherd’s staff‚ said the church had “a role to play” in nation building.

The sight of a Zanu PF leader visiting the apostolic sect is common. In the run-up to the 2013 elections‚ former president Robert Mugabe also addressed a similar gathering and was told by Taguta that he would win the election.

SADC observers will not endorse a sham election in Zimbabwe

The Southern African Development Community (SADC) observer mission says it will not endorse a bogus election in Zimbabwe.
News
2 years ago

In Bulawayo at the weekend‚ Chamisa —who is also a pastor at AFM —made an appearance at Eagle Life church led by “prophet” Blessing Chiza in the country’s second largest city‚ a day after he addressed a rally at White City stadium.

Chamisa‚ in a brief address to congregants‚ said if elected into office next week his task “would be to turn the heart of the nation back to God”.

“When the grace of God has come upon a person and he then says we will build bullet trains and spaghetti roads‚ people say he is mad‚” Chamisa said in his sermon‚ quoting a passage of scripture from the Bible to illustrate his foresight in turning around the country’s dilapidated infrastructural systems.

The 40-year-old leader gained notoriety on the campaign trail for his election promise to modernise the country’s railway and road systems.

Of the 55 political parties contesting for power next week‚ his MDC Alliance has been the most aggrieved. It said it would not boycott the poll‚ but would not allow it to take place.

On Tuesday‚ the alliance suffered yet another double-blow. The Zimbabwe Electoral Commission (ZEC) at a multi-party stakeholders meeting in the capital refused to accede to its last-minute demands over the ballot paper. Police also banned its plans to demonstrate at the commission’s offices from Wednesday until voting day.

Douglas Mwonzora‚ the MDC-T’s secretary general‚ said the refusal by the electoral commission to also allow its party agents to accompany the ballot papers to and from the polling stations was “suspicious”.

Zimbabwe just a week away from make-or-break elections

It’s a week away from make-or-break general elections in Zimbabwe and the two front runners‚ incumbent president Emmerson Mnangagwa‚ 75‚ of Zanu-PF ...
News
2 years ago

The police said the MDC had‚ over the last few weeks‚ been granted permission to protest against the ZEC at its offices twice and the latest request for another demonstration was not different.

The chief superintendent for Harare Central District‚ Albert Ncube‚ in a letter to Mwonzora said the alliance had “already applied for a star rally scheduled for the 28th which we have already sanctioned. We have also notified the Regulating Authority of the intended rally….the district is currently organising manpower for the rally”.

The police said they would invoke the Public Order and Security Act if the alliance violated its ban.