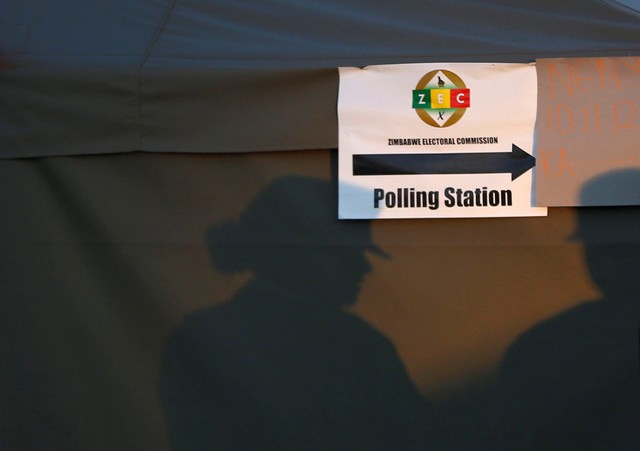 Police officers cast shadows on a tent of a polling station during the general elections in Harare, Zimbabwe, July 30, 2018.
Image: REUTERS/Siphiwe sibeko

The July 30 general election in Zimbabwe is significant because it marks the end to a campaign season which for the first time in decades has been without the influence of ousted president, Robert Mugabe. Unless the election fails to produce an outright winner with a 50+1 majority as stipulated by law, Zimbabweans will soon know who their next leader will be. The new president will serve a five year term.

The election comes just a few months after Mugabe was ousted at the military’s instigation. It will determine the country’s future in the world after so many years of being ostracised from the international community. The outcome will also shape Zimbabwe’s political and economic outlook. And it goes without saying that the onus will be on the new leader to usher in a new era for Zimbabweans.

‘Zimbabwe is open for business’

Despite the optimism and cautious hope that surrounded Emmerson Mnangagwa’s ascendancy to power, the economic situation in Zimbabwe has remained unchanged. The economy, which collapsed under Mugabe’s rule, is not yet out of the woods.

Despite its “Zimbabwe is open for business” mantra, Mnangagwa’s administration has battled to resuscitate the struggling economy. In the run-up to the polls the country remains afflicted by high unemployment, de-industrialisation and a severe liquidity crisis. This has affected the livelihoods of ordinary citizens many of who have resorted to eking out a living through street vending to put food on the table. The cost of living remains very high and those in the informal sector have borne the brunt.

Mnangagwa has promised to fix the economy and to lift the majority of Zimbabweans out of poverty.

As if reading from the same script, the main opposition candidate Nelson Chamisa has also promised to open Zimbabwe up to foreign investors, as well as to remedy the economic malaise that spread like a virus during the Mugabe era.

While on the campaign trail, the two main candidates, Chamisa (of the Movement for Democratic Change - Alliance) and Mnangagwa (of the ruling Zanu-PF), both promised heaven and earth. It therefore comes as no surprise that opinion polls and support on the ground for both candidates point to the fact that this election is a two-horse race between the MDC-Alliance, and Zanu-PF.

Chamisa has promised major infrastructural development that will include the transformation of rural economies into industrial hubs, an effective rail system boosted by the introduction of bullet trains, and the construction of modern freeways in Zimbabwe’s cities and towns.

In terms of economic revival both candidates have vowed to pursue foreign direct investment. Both say they will pay off Zimbabwe’s debts to the International Monetary Fund and the World Bank.

What Zimbabweans think about the upcoming elections

On Monday Zimbabweans will go to the polls‚ holding the first election since Robert Mugabe‚ who ruled the country for 37 years‚ was ousted.
News
3 years ago

They have both promised to root out corruption and address the land issue. Mnangagwa has said that the era of land grabs, multiple farms, and idle ownership is over. This has also been the same narrative from the MDC-Alliance. Both leaders have also said that they’ll work to salvage Zimbabwe’s international image.

There are clearly more similarities than differences between the two main contenders and their pledges to voters. But a few distinguishing factors remain evident.

Chamisa’s campaign is selling hope to the electorate. He has made good use of his great oratory skills to strike a hopeful chord with voters.

Mnangagwa, on the other hand, is focused on reform and stability. He has made frequent mention of the ‘successes’ of his “new dispensation”, namely combating corruption, securing investment commitments, and kickstarting economic recovery. This is a tactic that is designed to justify why the electorate should give him a second bite at the cherry.

It will be interesting to gauge whether rally attendance will translate into votes as Zimbabweans go to the polls. Both Zanu-PF and the MDC-Alliance recorded well-attended rallies, though the opposition has several times lampooned Zanu-PF for bussing school children in to shore up support at its rallies.

If rally attendance is anything to go by, it would seem that the race is too close to call. With that being said, rally attendance might not be the best yardstick to measure popular support.

Important to keep in mind, however, is that citizens attend rallies for varied reasons . Some go for entertainment purposes; some are forced, and some are in search of free T-shirts, party paraphernalia, food, and drink. Others attend just to see their political idols in the flesh.

No steps are taken at these rallies to determine if attendees are registered voters.

And then there is the issue of opinion polls. A recent opinion poll by Afrobarometer is predicting that Mnangagwa will garner 40% of the vote, with 37% for Chamisa. About 20% of respondents refused to disclose their preferences and 3% said they would vote for other parties.

Even with the knowledge that opinion polling is not an exact science it is likely to be a tight race between Mnangagwa, the establishment candidate, and Chamisa, his youthful contender.