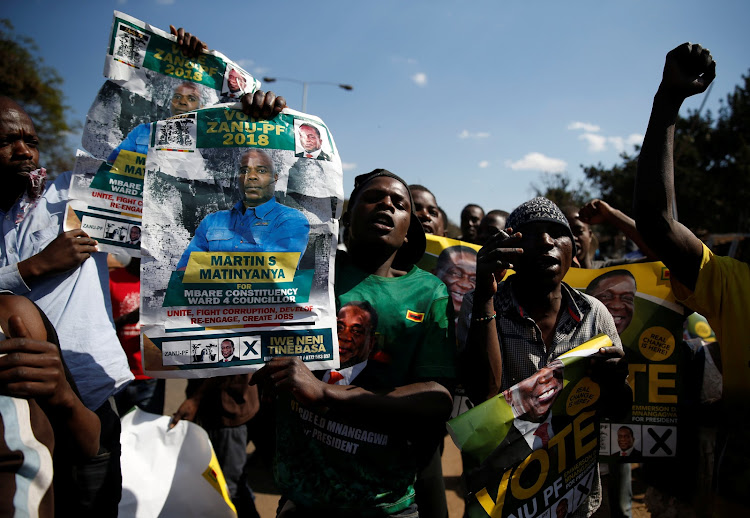 Police fired tear gas to disperse stone-throwing protesters in Harare on Wednesday as the main opposition leader accused the ruling party of trying to rig the result of Zimbabwe’s election.

European Union observers also questioned the conduct of Zimbabwe’s first election since Robert Mugabe was forced to resign following a de facto coup in November after nearly 40 years in power. They expressed concern about delays in releasing the results of the presidential contest.

The leader of the opposition Movement for Democratic Change, Nelson Chamisa said on Twitter he had won the “popular vote” in Monday’s parliamentary and presidential in which he faced off against Mugabe’s successor, Emmerson Mnangagwa from the ruling Zanu-PF party.

Mnangagwa also took to Twitter, calling for calm and urging patience before the results were announced.

Crowds burnt tyres in the centre of the capital Harare, blocking some streets and engaging in running battles with police who fired water cannon to disperse the protestors.

The EU’s Chief Observer, Elmar Brok, said he did not yet know if the shortcomings would have a material effect on the outcome of the vote, and he criticised the Zimbabwe Electoral Commission (ZEC) for being at times “one-sided”.

The EU’s assessment is critical in determining whether Zimbabwe can shed its pariah status as it could help attract investors and trigger an economic revival. The EU did not understand why the release of the presidential result was taking so long, he said.

“The longer it lasts that the results of the presidential election is not known, the more lack of credibility it provides,” Brok said.

Zimbabwe’s ruling party was on track for a resounding victory in the first parliamentary election of the post-Robert Mugabe era as the count neared ...
Business Times
4 years ago

Zimbabwean civil society groups are working on a court application to force the electoral commission to get all polling stations to publish results, ...
News
4 years ago