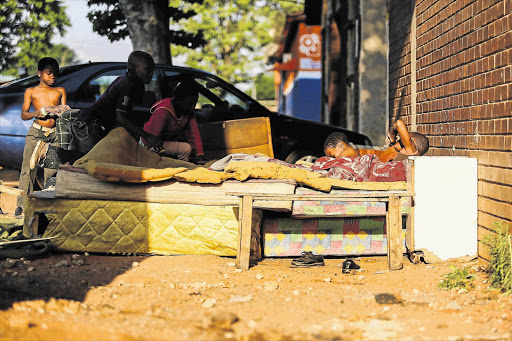 Children play on a damaged bed after an eviction in Jeppestown, Johannesburg.
Image: Moeletsi Mabe

The number of Somalis left homeless has surged this year as thousands who had already fled war, drought and floods were forcibly evicted from mostly makeshift homes, the Norwegian Refugee Council (NRC) said.

The aid group, in a report published on Tuesday, said one of the main factors driving people out of their homes was property developers requisitioning land, often without warning, during a building boom in the capital Mogadishu.

More than 200,000 Somalis, or one in 60 of the population, were forcibly evicted from their homes in January-July, more than double the number in the same period last year, the group said.

I came back [home] to see my children on the street

NRC said most evictions were done without due process, including without prior notice, and called on the government to address the problem by developing land policies and improving access to land for people who were forced from their homes.

Many had fled to urban areas after being displaced by natural disasters and conflict in other parts of the country.

The aid group said Somali authorities and landowners were evicting people from public and private land mainly in battle-scarred Mogadishu, which is seeing a building boom.

"These people are already in a vulnerable position. They have nowhere to go," Evelyn Aero, NRC's adviser for information, counselling and legal assistance, said.

Somali government officials were not immediately available to comment.

A farmer with eight children who was interviewed by the NRC said she was not at home in Mogadishu when her family was forced out.

"I came back to see my children on the street," said Halimo Sidow, who had fled drought last year in the Lower Shabelle region in southern Somalia.

Somalia is also struggling to recover from more than 25 years of civil war and an ongoing battle between its federal government and Islamist insurgents, but is starting to attract investment again from Somalis living abroad.

They send back home $2.3 billion annually and some of that cash - as well as hundreds of millions of dollars in aid - has been financing the construction of hotels, commercial buildings and houses in the capital of Mogadishu.

In 2017, the United Nations estimated that more than half the population of 12 million needed food aid. A similar drought in 2011, exacerbated by years of war that began in 1991, sparked the world's last famine, which killed 260,000 people.

Fighting between Somalia's semi-autonomous Puntland region and breakaway Somaliland has killed dozens of soldiers, according to a witness and a ...
News
3 years ago

At least 15 people have died in Somaliland after heavy rains caused by tropical cyclone Sagar which landed in the Horn of Africa over the weekend.
News
3 years ago