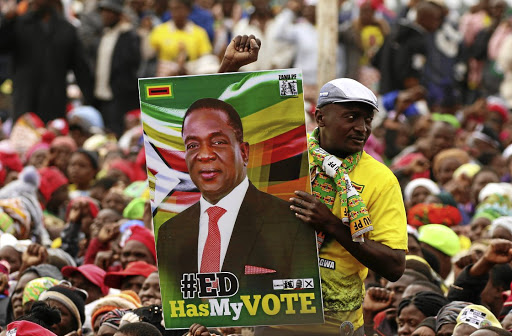 Zimbabwean president Emmerson Mnangagwa said on Monday a new tax on electronic payments was a painful but necessary part of the government's attempts to revive the economy, his first comments since the imposition of the levy last week sparked a public outcry.

After narrowly winning a disputed presidential vote in July, Mnangagwa is trying to put back on track an economy that all but collapsed under the near four-decade rule of Robert Mugabe which ended after an army coup last November.

Finance minister Mthuli Ncube announced the 2 percent tax on October 1, saying the money raised would be used in the roads, health and education sectors.

The tax will apply on mobile and card payments and bank transfers above $10 with exceptions for foreign payments and transfer of government funds.

However business and citizens objected, saying they would be paying for the government's profligate spending.

Oil companies temporarily stopped delivering fuel because of the impact of the tax, causing shortages. The price of some basic goods and medical drugs have shot up in the last few days.

To improve the economy, the government would have "to take measures that are going to be painful and this is one of such measures", Mnangagwa told a business meeting in Harare. "In our quest to leapfrog and cover the period of two decades of stagnation, these things have become necessary."

A 388-page government economic plan released by finance minister Ncube on Friday shows the government plans cuts in spending, borrowing and the amount it spends on the civil service. The report also outlines plans for privatisation and the closure of state-owned firms, among several other reforms to improve the economy.

Zimbabwe is facing acute shortages of US dollars, which the country adopted in 2009 when it abandoned its own currency after hyperinflation made it worthless.

The shortages have fanned a black market where the premium for dollars increased to more than 200 percent on Monday, up from 165 percent on Saturday.

Two months after disputed general elections in Zimbabwe‚ President Emmerson Mnangagwa’s spirited efforts to turn around the economy are so far ...
News
3 years ago