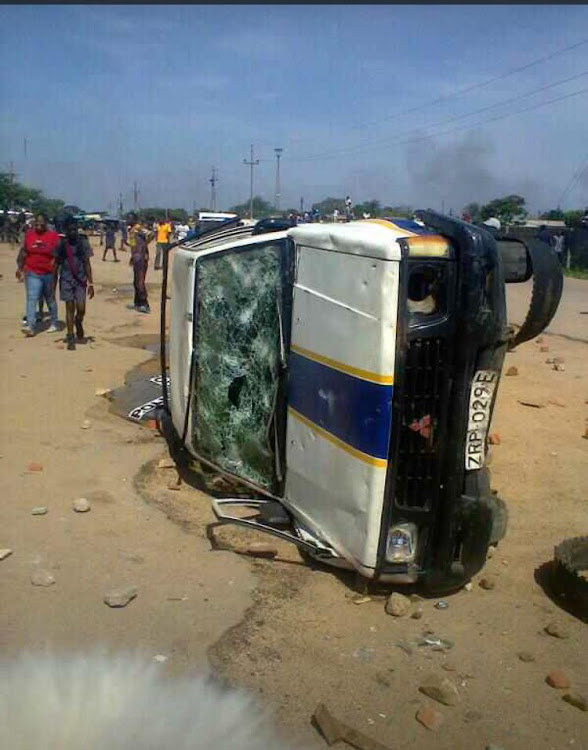 Pictures emerging on social media show some of the chaos in Bulawayo as protesters took to the streets. Police appeared to be overwhelmed. 'The people are angry. We are going back to the station because they outnumber us,' a police officer told journalists.
Image: Supplied

The usually quiet Zimbabwean city of Bulawayo was turned into a mixture of teargas, black smoke from burning tyres and chanting of struggle songs on Monday as residents joined in protests over the latest fuel hike.

"Into oyenzayo siyayizonda" - which loosely translates to "we hate what you are doing" - was the battle cry among protesters who took to the streets to express their displeasure at the worsening economic environment in South Africa's northern neighbour.

The protest was unmistakably directed at President Emmerson Mnangagwa, who has been at the helm since November 2017 after his ousting of Robert Mugabe.

A fuel hike announced by Mnangagwa on Saturday, a day before he left for Russia, was the final straw for most protesters. Fuel prices more than doubled overnight.

The Zimbabwe Congress of Trade Unions (ZCTU), which had for years been relegated to the back bench of politics, appeared to have found a new lease of life on Sunday. The union’s president, Peter Mutasa, called for a three-day stayaway - to last until Wednesday - in protest over the fuel hike.

While most citizens heeded ZCTU’s call only midway through the morning, Bulawayo residents appear to have enjoyed a head-start, responding almost immediately.

This common thread has raised speculation among the country’s security structures of some co-ordination, organisation and planning by the protesters.

Mnangagwa, to pre-empt street protests on Saturday, issued a threat to the "certain elements" which he said were bent on taking advantage of the fuel shortages to "cause and sponsor unrest and instability" in the country.

Police appeared overwhelmed by the protesters, whose march first began in townships but quickly reached the city centre. The water cannons and teargas appeared to be no deterrent. When police threw teargas canisters at protesters, they just picked them up and hurled them back at the police.

A crew of journalists hired a taxi in an attempt to move into the heart of demonstrations in the city centre, but the protesters who toyi-toyied threw missiles at them — afraid that their faces would be photographed and used later to track them down by authorities.

Other innocent passersby who got entangled in the protests said they were concerned with their violent nature, a deviation from the peaceful call which had been made.

Along Masiyephambili Drive, which links most high-density suburbs with the city centre, overwhelmed and outnumbered police began to retreat from their position by midday.

"We can’t guarantee your safety. The people are angry. We are going back to the station because they outnumber us," a police officer told journalists.

Public transport grinds to a halt in Zimbabwe as stayaway begins

Public transport has ground to a halt in Zimbabwe, as commuter omnibus operators joined a three-day stayaway on Monday, called by the Zimbabwe ...
News
2 years ago

In the CBD, most businesses closed down, turning the city centre into a ghost town on what normally is a very busy day. At hotels, security conducted careful searches of people going inside. Most service stations around the city were also closed.

A hardware store owner said he shut shop because he supported the stayaway.

"But the way it is turning out to be, I made the right decision because there are some unruly elements now looting," he said.

There have been widespread reports of looting by some of the protesters. At an OK supermarket at Entumbane complex, some protesters attempted to break in. Just a few metres away, a police car lay razed to the ground by fire.

A police officer conceded that he had not seen anything like this in all his years in the police service.

"The spirit of protest was not there in this city and arguably even in Harare. The November 2017 military intervention, coupled with the constitutional court ruling last year that declared that people have a right to demonstrate, gave the masses courage. Under Mugabe no one dared do this. His removal broke the chains," he said.

A national stayaway kicked off on Monday in opposition to Zimbabwean president Emmerson Mnangagwa hiking fuel prices by 120 percent on Saturday.
News
2 years ago

A three-day stayaway called by the country’s largest labour union, the Zimbabwe Congress of Trade Union, quickly descended into clashes between ...
News
2 years ago