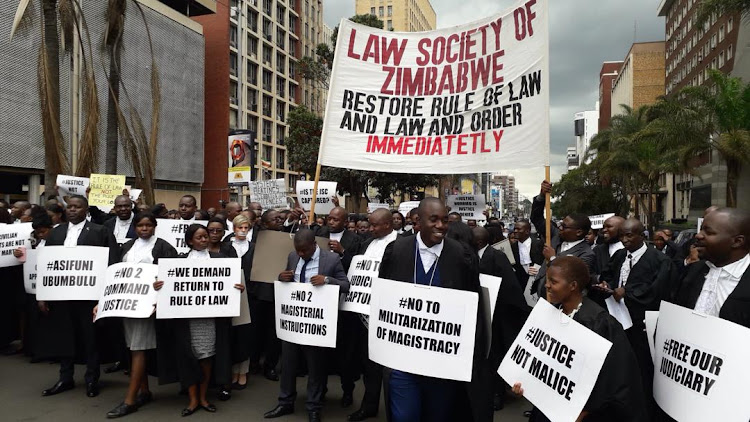 Lawyers in Zimbabwe took to the streets on Tuesday January 29 2018 demanding a restoration of the rule of law in the country.
Image: Supplied

Hundreds of lawyers dressed in their black gowns marched in Harare’s city centre to the Constitutional Court on Tuesday to call for the immediate restoration of the rule of law and order in Zimbabwe.

The march was organised by the Law Society of Zimbabwe, the largest body of legal practitioners across the country.

The march comes after the group said it had noted a worrying trend across the sections of the judiciary, where their clients were being denied bail and there was a surge in the fast-tracking of trials.

It said fast-tracking,  routine denial of bail, routine dismissal of applications, and blatant disregard of the constitutional provisions relating to the right to fair trial were "causing alarm in the profession".

Nelson Chamisa, the president of the Movement for Democratic Change (MDC) in Zimbabwe, said an ongoing crackdown by security forces was meant “to ...
News
3 years ago

Riot police were stationed outside the Constitutional Court building, in a face-off against the placard-carrying lawyers. This was the first time that there has been any mass gathering since protests a fortnight ago.

Some of the placards read "respect the constitution", "no to judicial capture", "no to command justice" and "asifuni bumbulu" (loosely translated to "we don’t want any nonsense").

As the lawyers marched to the top court, they stopped briefly outside the Munhumutapa offices, the seat of power of Zimbabwe’s government under President Emmerson Mnangagwa, which is across the road from the courthouse.

The country has been on edge since protests broke out two weeks ago sparked by a  fuel price hike. Security forces responded to the protests with excessive force, resulting in a dozen deaths, according to rights groups.

On Tuesday, police said 1,000 people across Harare, Bulawayo and the Midlands province had so far been arrested related to the stayaway.

DA to approach ICC, UN and parliament on Zimbabwe crisis

The DA will write to the Office of the Prosecutor of the International Criminal Court (ICC) as part of its interventions to resolve the current ...
Politics
3 years ago

At a media briefing on Tuesday, Nelson Chamisa, the Movement for Democratic Change leader, said the intention was to "cripple" the country’s largest opposition party.

Top human rights lawyer Beatrice Mtetwa told TimesLIVE that she was "excited" by the march by the country’s lawyers as she led an entourage of senior, middle and junior lawyers to hand their grievances to the court's officials for the attention of chief justice Luke Malaba.

"We want respect for the constitution, human rights and the conduct of trials to be done in a fair manner," Mtetwa told journalists after she handed over the  lawyers' grievances to court officials.

Another lawyer, Fadzayi Mahere, said the march was in support of fair trials and legal representation, following a military-led crackdown.

"There has been violation of people’s rights to bail," said Mahere.

Douglas Coltart, also a lawyer, said there appeared to be a directive given across the board, where bail was being denied to clients.

"It's summary trial, we as lawyers can’t do our jobs effectively. Lawyers have come out to say, 'let's have respect for the rule of law and constitutionalism'," he said.

Police spokesperson Charity Charamba said security services were not involved in any brutalisation of citizens. The police said there had been only one officially reported rape case, which was  in Chitungwiza.

"Let it be known that no one is above the law, be it bona fide or bogus members of the security services. Any abuse should be reported to the police ... Without being discriminatory, we are aware that women and children suffer the brunt of any conflict," said Charamba.

Zim businesses lost $500m in a week to looting, stayaway and riots

Protest music fights back after brutal security crackdown in Zim