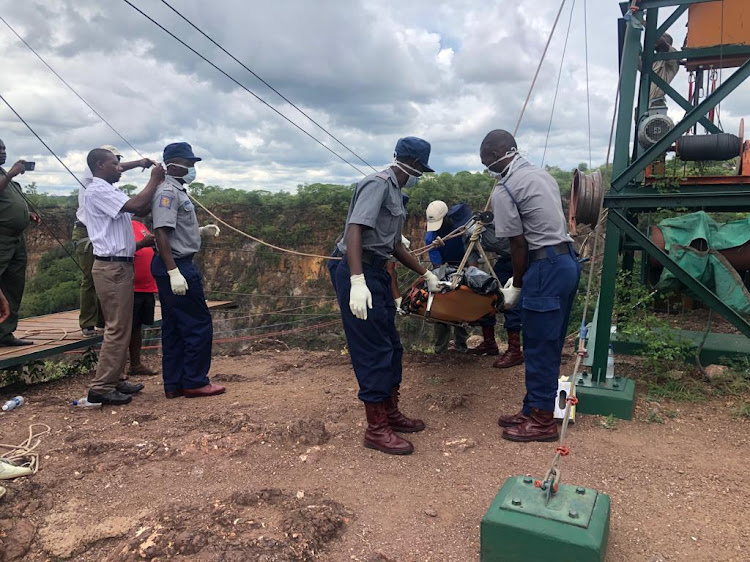 The body of an Israeli tourist was recovered from a gorge on the Zambezi River after he drowned on Sunday.
Image: Vuyo Ndaba

An Israeli tourist has drowned in the mighty Zambezi River. His body was found floating in a gorge near the Victoria Falls Hotel.

The deceased has been identified as Ofer Cohen, 34. He had entered Zimbabwe through the Victoria Falls Airport last week.

It is suspected that he went alone to the Zambezi River on Sunday to swim under the Victoria Falls bridge near Rapid Number 1. He was apparently not wearing a life jacket.

Swimming is prohibited in the Zambezi River because of the volatile currents, crocodiles and hippos, while activities on the river are done under the close watch of skilled guides. Even guided rafting activities are suspended at this time of the year on that part of the river as water levels rise daily.

Cohen was in possession of a Polish passport and was on holiday alone, police said.

He allegedly set off on a sunset stroll on Sunday, where he is believed to have jumped into the river to swim. He was only wearing a pair of shorts.

With water levels rising significantly due to seasonal rainfall upstream, Cohen was allegedly overwhelmed by the current and swept downstream from Rapid Number 1 to Rapid Number 4, where his body was found floating on Tuesday morning.

It took more than two hours for the rescuers to recover the body. They used a swing line to bring the body to the top of the gorge on a stretcher.

Cohen's friend Ralf Newbey, in whose house he was staying, said they reported him missing on Tuesday morning after spotting a body in the gorge.

"He drove from home on Sunday to have a sunset view of the rainforest and later went down the river for a photoshoot. That's when he decided to swim without a life jacket. We looked for him on Monday and saw the car parked near the rainforest, and on Tuesday saw his clothes on the edge of the river, near the water," said Newbey.

Police said they are investigating the circumstances around Cohen's drowning.

Drowning and water-associated emergency incidents peak during December and January‚ with people who may be inexperienced or unable to swim getting ...
News
4 years ago

A Gauteng tourist died during a scuba dive at Shelley Beach along the KwaZulu-Natal south coast on Thursday.
News
3 years ago

The search for a missing Chilean backpacker in South Africa has come to a tragic end after his father discovered his body in a morgue in Ladysmith‚ ...
News
3 years ago