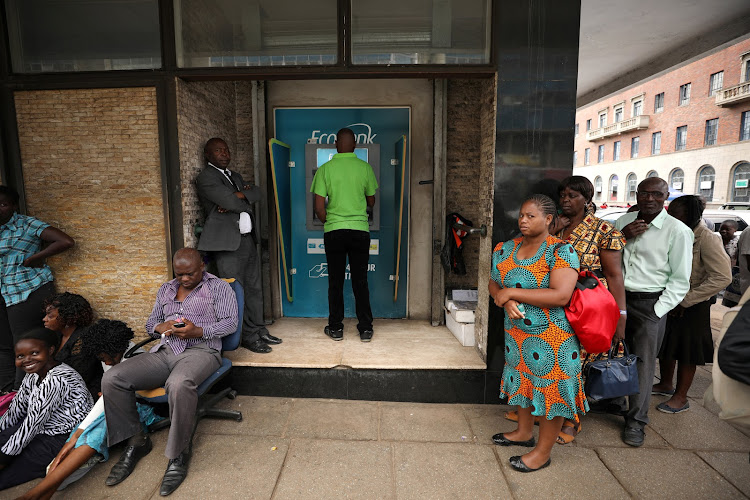 People queue outside a bank in Harare, Zimbabwe, on February 22 2019 as banks reopen after a bank holiday.
Image: REUTERS / Mike Hutchings

Zimbabwe's central bank began trading a sharply discounted replacement currency on Friday, attempting to ease a cash crunch that has hobbled the economy and plunged millions deeper into poverty.

The Reserve Bank of Zimbabwe said on Wednesday it would scrap the official 1:1 peg between its quasi-currency bond note and the US dollar, creating a new parallel currency called RTGS dollars.

Commercial banks reopened on Friday after a bank holiday, but with exchange facilities from bond notes to US dollars at the same 2.5 rate limited to individual and corporate holders of foreign-currency accounts, queues outside appeared to be no longer than usual.

The bond notes and notional electronic funds have plummeted on Zimbabwe's black market in recent months to around 4 per dollar, driven by a dearth of hard currency.

Economists cautiously welcomed the central bank's decision to allow its currency to devalue.

Interbank trading was not due to start until Monday, when other account holders will be eligible to buy US dollars.

Robert Mugabe: Gone but not forgotten, as he turns 95

Robert Mugabe may no longer be president, but vestiges of his rule still remain in Zimbabwe.
News
2 years ago

The Zimbabwe Defence Forces (ZDF) are set to conduct door–to-door searches countrywide to look for army regalia allegedly used by "rogue elements" in ...
News
2 years ago
Next Article