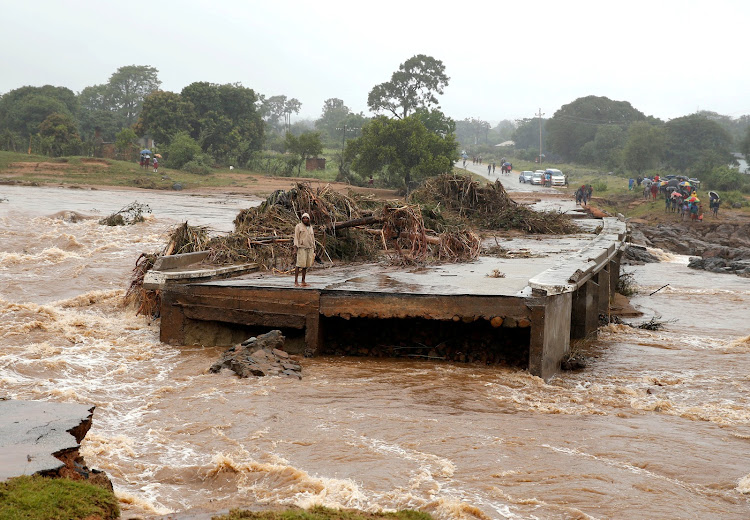 A man stands on a bridge on the Umvumvu River that was washed away by Cyclone Idai in Chimanimani, Zimbabwe.
Image: REUTERS/Philimon Bulawayo

Within a year, Zimbabwe has been struck by both man-made and natural disasters - and the government’s delayed response has forced the public to take the initiative to help those affected.

The latest disaster is the trail of destruction left by Cyclone Idai, which swept across Mozambique, Malawi and eastern parts of Zimbabwe.

In Zimbabwe, probably the least affected of the three countries, 11,719 people were affected, with scores of people reported dead, more than a hundred injured and over 200 missing.

Had there been a proper mitigation strategy to reduce the impacts and risks of hazards through proactive measures taken before an emergency or disaster occurs, the number of deaths, injuries and missing people would have surely been much lower.

The country’s Meteorological Service Department (MSD) raised the alarm two weeks before the tropical cyclone hit Zimbabwe. MSD director Tichaona Zinyemba warned that it would “generate torrential rains and exceedingly strong winds, resulting in flooding and destruction of infrastructure along its path".

Armed with that knowledge - despite the limited time at hand before the disaster - schools should have been shut down and pupils sent home.

At one boarding school in particular - St Charles Lwanga High School in Manicaland - 200 pupils, teachers and supporting staff were left stranded by the storm. With no help during the first two days, they were left to fend for themselves.

Without a blueprint in place to deal with such a disaster, the Zimbabwe National Army engineers’ corps were forced to wait for water levels to subside and visibility to improve because its helicopters could not fly into the affected areas in Chimanimani.

Across Mozambique, Malawi and Zimbabwe, communities are picking up the pieces following Cyclone Idai.
News
3 years ago

In villages, state resources could have been used to move people to safety. With the unavailability of camps, displaced people could have been sent to relatives in less affected areas. Or public and private property could have been used as temporary transit camps - such as the Chimanimani Hotel, which led by example by taking in about 200 families.

Opposition politicians blame the Zanu-PF government for sleeping on duty. Some Zanu-PF officials have in turn been quick to rebuke the allegations. The ruling party has argued that even in developed countries, natural disasters leave a trail of death and destruction.

But a properly functioning society with efficient institutions should always have an effective civil protection unit (CPU) that is ready for inevitable disasters like Cyclone Idai.

The newly introduced RTGS dollar, if allocated efficiently, could have saved a lot of money. By the time government comprehends just how much the destroyed schools, bridges, roads, government buildings and homes will cost to replace, one will appreciate that investing in a viable budget for the CPU is imperative.

By November last year, the CPU had already exhausted its mere $3m budget in dealing with the cholera outbreak that killed at least 47 people, 70 bus accidents and a spate of fires that destroyed property in the country’s major cities. At the time, the unit said they needed at least $10m. However, in the 2019 budget, the CPU got just under $2.4m.

Nevertheless, this money should have been spent on effective early-warning systems and coordinated evacuation plans.

This situation created an opportunity for grandstanding by opposition parties. MDC Alliance leader Nelson Chamisa seized the moment when he personally went to help the stranded. Social media was awash with pictures of him hard at work in the mud.

According to his spokesperson Dr Nkululeko Sibanda, “The president, advocate Nelson Chamisa, spent hours on the trail of Cyclone Idai. Given [the] areas covered, he has the widest understanding of the situation, [more] than anyone else. He is encouraged by the people's spirit and [is] in mourning for the victims.”

Already facing a backlash for “misplaced priorities”, President Mnangagwa and his deputy Constantino Chiwenga only made the trip to affected areas on Tuesday. Some expected him to be the early bird at the scene after he aborted his state visit to the United Arab Emirates to be “with his people”, but on Monday he was swearing at the minister of state for Harare, Oliver Chidawu, when the situation deteriorated in Chimanimani.

Meanwhile, Zimbabweans from all walks of life have been crowd-sourcing relief aid to complement efforts by donor organisations.

The ministry of finance has since disbursed $50m for emergency and infrastructure restoration - yet in the allocation of this budget, disaster management was only given 4.2% of the total amount.

The crisis has led to Zimbabwe president Emmerson Mnangagwa declaring a state of disaster in the affected areas, and thousands taking to social media ...
TshisaLIVE
3 years ago

At least 24 people have died in south eastern Zimbabwe as homes and bridges were swept away by a tropical storm, the country's information ministry ...
News
3 years ago

At least 24 people have died in Cyclone Idai, which moved into eastern Zimbabwe at the weekend from Mozambique.
News
3 years ago