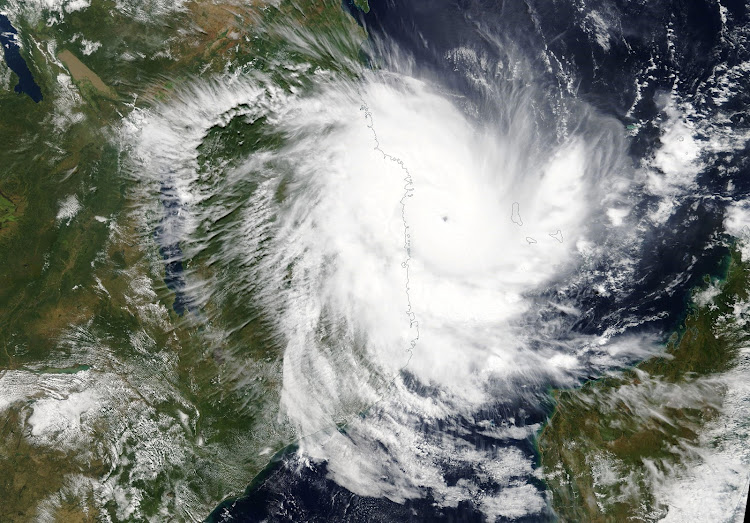 Impoverished Mozambique is still recovering from another powerful tropical cyclone which made landfall further south last month, flattening the port city of Beira and killing more than 1,000 people.
Image: NASA/Handout via REUTERS

Cyclone Kenneth battered northern Mozambique on Thursday with sustained winds of up to 220 km per hour (137 miles per hour) after killing three people on the island nation of Comoros overnight.

Impoverished Mozambique is still recovering from another powerful tropical cyclone which made landfall further south last month, flattening the port city of Beira and killing more than 1,000 people across a vast swathe of southeastern Africa.

A spokesman for Mozambique's National Institute of Disaster Management (INGC) said although Kenneth had not yet made landfall it was nearing Cabo Delgado province, where it was raining heavily.

"We've already evacuated 30,000 people from the areas likely to be hit by the cyclone. The compulsory evacuation process will continue until we have all people in secure ground," INGC spokesman Paulo Tomas said.

This is Pemba in #Mozambique, #CycloneKenneth is now moving with a speed of 100km/h. pic.twitter.com/SSDQv5a9Ye

Mozambican officials said on Wednesday more than 680,000 people were at risk from the latest storm. There were concerns that five rivers and coastal waterways could burst their banks, leading to severe flooding.

Government and humanitarian officials did not anticipate the extent of the flooding in the wake of Cyclone Idai last month, and an early warning system implemented did not reach everyone.

Antonie Beleza, deputy national director of Mozambique's Centre for Emergency Operations, told Reuters that this time around the centre had been telling people for days to move out of 17 at-risk districts.

Saviano Abreu of the United Nations humanitarian arm OCHA said the UN and non-governmental organisations were assisting the government with a preparedness strategy.

In neighbouring Zimbabwe, where hundreds died in heavy rains following Cyclone Idai, the civil protection department sent out a warning that some areas near the eastern border with Mozambique could be affected by the cyclone.

It said people living in low-lying areas including in Masvingo province, Chimanimani, Chipinge, Mutoko, Mudzi and Gokwe North should be on high alert.

In Comoros early on Thursday, falled trees and debris from homes were scattered over streets, and houses had their roofs torn off.

The winds caused widespread power outages in the northern part of the main island, Grande Comore, and the capital Moroni as well as on the island of Anjouan, residents said. Government offices and schools were closed.

Violent winds of up to 140km/h lashed the East African island nation of Comoros overnight, killing three people, authorities said on Thursday, as ...
News
3 years ago

Cyclone Kenneth to hit Mozambique and Tanzania on Thursday

A tropical cyclone is expected to make landfall in Mozambique later this week, the South African Weather Service has confirmed.
News
3 years ago

UN accolade for rare courage and dedication in Mozambique cyclone

An SA team of medical and emergency workers has been recognised by the UN for its rescue efforts in Mozambique during the recent devastating Cyclone ...
News
3 years ago