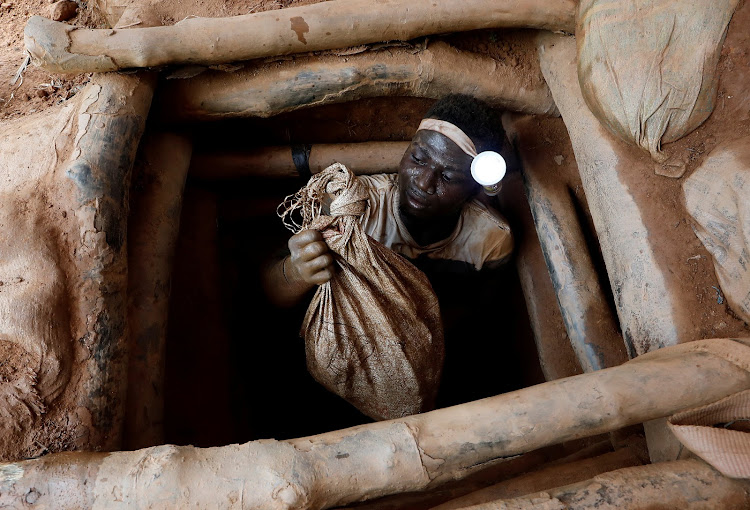 An artisanal miner climbs out of a gold mine with a bag of rocks broken off from inside the mining pit at the unlicensed mining site of Nsuaem Top in Ghana.
Image: REUTERS/Zohra Bensemra/File Photo

It took Reuters journalists a few days of research to work out that the numbers coming out of Africa’s vast gold trade did not add up.

It then took almost another 15 months - and the contributions of colleagues and analysts across the world - to show how those discrepancies pointed to a vast web of smuggling operations, reaching from the pit mines of the Democratic Republic of Congo across the continent to the Gulf.

Reuters has now published the first results of all that work – an exclusive report on the billions of dollars' worth of gold spirited out of Africa every year through the United Arab Emirates, a gateway to markets in Europe, the United States and beyond. ()

It gives a rare picture of the scale of a hidden trade that is exposing workers to dangerous conditions and depriving African states of millions in customs revenues and taxes.

The report was built on a study of the latest available figures recorded in Comtrade, a United Nations trade portal, for 2016. These showed there were substantial differences between the amount of gold that African states said they were exporting, and the much bigger amounts that arrived in the UAE.

Zimbabwe will scrap a law that denies foreign platinum mining companies control of their operations in the country, the mines minister said on ...
News
3 years ago

“The nature of the often illegal business means getting a sense of how much gold these miners produce, and where it goes, is tough. Gold passes from pits to middlemen, much of it eluding officials ... So we collected and analysed the data,” said David Lewis, who reported on the story from Nairobi with Ryan McNeill and Zandi Shabalala from London.

The team scoured academic literature and spoke with trade economists to better understand how to interpret the often patchy data.

The figures were filled out by visits to some of the most remote corners of the continent where miners were swapping their pick-axes and shovels for diggers and crushers in a booming illicit industry.

Activists said accidents were frequent. In one week this February, more than 100 people died in three incidents at illegal mining operations in Zimbabwe, Guinea and Liberia.

Reuters contacted 23 mining companies with African operations and presented its findings to 14 African governments for comment. The scale of the problem was news to some of those officials. Informal mining is "an area that we have not properly figured out," Togo's director of mining development and controls, Nestor Kossi Adjehoun, said.