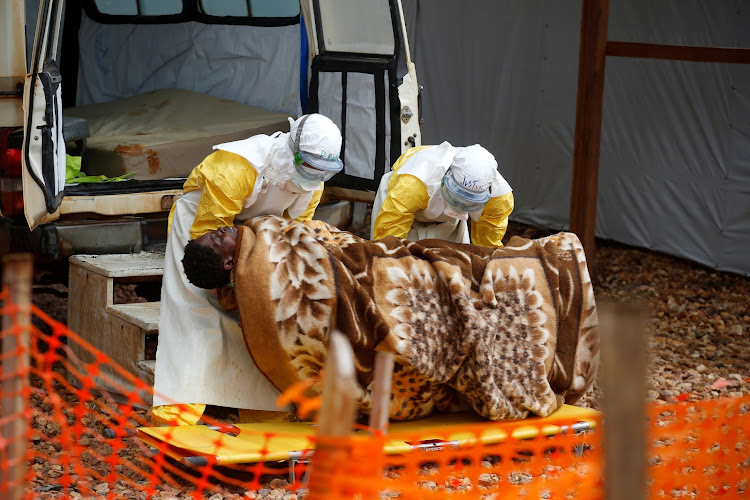 Health workers dressed in protective suits carry a Congolese woman confirmed to have Ebola as she is admitted to the Ebola treatment centre in Butembo, DRC, on March 28 2019.
Image: REUTERS/Baz Ratner

The UN named an emergency Ebola response co-ordinator on Thursday, creating a new position to boost efforts to contain a 10-month epidemic in the Democratic Republic of Congo (DRC) that has killed more than 1,200 people.

The drive to rein in the deadly virus has been hampered by attacks on treatment centres by armed groups operating in Congo’s lawless east as well as by distrust among local residents, many of whom view the disease as a conspiracy.

The outbreak has been contained in parts of Ituri and North Kivu provinces, but risks of spreading to other provinces and neighbouring countries remain "very high", the UN and World Health Organisation (WHO) said in a statement.

Stronger political engagement and operational support to negotiate access to communities is needed, and readiness planning for Goma, a lakeside city of 1 million people near the Rwandan border, it said.

David Gressly, currently deputy chief of the UN's Monusco peacekeeping mission in Congo, has been appointed to the new post, the statement said.

"He will oversee the co-ordination of international support for the Ebola response and work to ensure that an enabling environment - particularly security and political - is in place to allow the Ebola response to be even more effective," it said.

The Congolese health minister called on Wednesday for Merck's experimental Ebola vaccine to be fully licensed to facilitate its use in the Ebola-hit country, while saying Johnson & Johnson's rival drug would complicate matters.