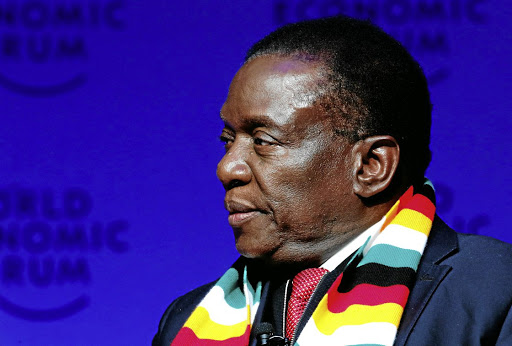 Since the disputed general elections on July 30 2018, President Emmerson Mnangagwa's government has been rocked by a series of protests and strikes by workers.
Image: Supplied

The Zimbabwean government is expected to enact a law this week that will outlaw workers from staging strikes and protests before exhausting other avenues.

The new law comes at a time when the country's government has stopped police officers from retiring or taking leave.

Since the disputed general elections on July 30 2018, President Emmerson Mnangagwa's government has been rocked by a series of protests and strikes by workers. Doctors and nurses have led from the front in strikes that brought the country's health sector to its knees.

Doctors said on Wednesday that patients in Zimbabwe's biggest state hospital were dying due to a lack of medicines and basic supplies, brought on by ...
News
3 years ago

Labour minister Sekai Nzenza said the Tripartite Negotiating Forum (TNF) Bill, which is due to be signed into law by the president, will ensure that government workers can no longer go on strike before engaging all stakeholders - government, industry captains and the Apex Council that brings together all workers' unions.

“Workers can no longer engage in stayaways before engaging the TNF stakeholders,” she said.

During public hearings following the second reading of the bill in parliament earlier this month, legislators were told that there was concern over the power the bill will give to the government. The public warned that the government, as the employer, should not dominate the establishment.

The TNF Bill provisionally had 14 representatives from the government, compared to seven from labour. For workers this means that voting powers lie with the government.

In the past, the TNF had been a voluntary organisation with no legal mandate.

Teachers in Zimbabwe, who say their salaries are now so eroded they cannot afford to buy groceries or pay for school fees for their own children, are ...
News
3 years ago

Meanwhile, Zimbabwe's government on Monday invited the Apex Council to the negotiating table against the backdrop of a looming strike by teachers. The government told the council that civil service salaries are set to be reviewed.

“Previously we demanded the lowest salary to be ZWL$1700. When we meet government we will ask for more because of inflation,” said Apex Council president Cecilia Alexander.

The government believes the opposition is using the country's dire economic situation for political mileage and a possible revolt. As a result, the Zimbabwe Republic Police (ZRP) has been appealing to the public to avoid protests and violence, dismissing them as “foreign characteristics” to “peace-loving” Zimbabweans.

The police force has also stopped officers from taking leave or resigning as it readies for demonstrations.

“All forms of leave and time off have been cancelled/suspended until further notice. All officers and members should be advised to report back to their respective workstations by June 1 without fail,” reads a recent police memo.

The biggest casualty at the MDC Alliance’s elective congress in Gweru, Zimbabwe, at the weekend is outgoing secretary-general Douglas Mwonzora.
News
3 years ago

'Two Weeks in November' is a real-world life or death chess match for the future of a country where the political endgame is never a forgone ...
Books
3 years ago