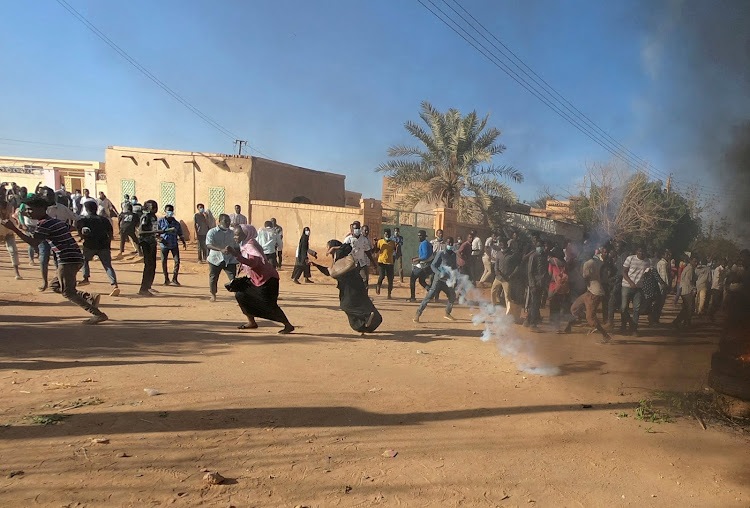 Sudanese demonstrators run from a teargas canister fired by riot policemen to disperse them as they participate in anti-government protests in Omdurman, Khartoum, in January.
Image: REUTERS/Mohamed Nureldin Abdallah/File Photo

Sudan's unrest and rising death toll are dominating global news headlines and social media platforms as people raise awareness about what is going on in the war-torn country.

Al Jazeera reported that doctors confirmed that at least 120 people had been killed, with the military council allegedly admitting to dispersing a staged sit-in by protesters in central Khartoum on June 3.

The Telegraph reported that the exact number of people killed in the crackdown was not known, but doctors confirmed that 40 bodies had been discovered in the Nile after the incident.

This week's military crackdown followed peaceful protests against the Transitional Military Council (TMC), during which protesters demanded a civilian-led government following the ousting of President Omar al-Bashir in April.

A BBC report states that a council of generals from the military took over immediately after Bashir's ousting, but has struggled to maintain peace in the country, despite promising to do so.

According to Al Jazeera, a military spokesperson admitted that "mistakes" had been made in the crackdown. An official report on the offensive is expected on Saturday.

Reuters reported that at least 17 people had been killed in Darfur, 15 injured and hundreds of homes burnt down after nomads and residents clashed over the rising costs of goods.

In other areas, there had been violence between residents and the military, with scores of people killed.

CNN reported that more than 300,000 people had been killed in the Darfur conflict between 2003 and 2008, with some estimates placing that figure much higher.

On social media, the plight of the Sudanese has been given a platform.

Pray for Sudan
I stand by people of Sudan
By the women and children who are oppressed and violated and the men who are ridiculed and silenced
We are one ❤#PrayforSudan #SudanMassacre #prayforsudan blue pic.twitter.com/5jS0r77wFw

this is what’s happening in sudan and nothing has changed till now help saving lives by sharing this video and letting the world know they need help. #PrayForSudan #SudanMassacre #IAmTheSudanRevolutionpic.twitter.com/m6B8DGdTfM

Some killed
Some missing
Some raped
Some beaten
😭😭😥😥😥
Ya hayyu Ya qayyum make it easy for the people of sudan. Ameen#SudanMassacre pic.twitter.com/1CdTKXLCUb

What’s happening in Sudan rn is devastating
Peaceful protesters are being killed and their body thrown in the Nile.
Men, women and little children are being raped by the army
There’s currently an internet blackout
The world is SILENT! No foreign intervention#SudanMassacre #Sudan pic.twitter.com/yiLWNebcYt

There is a genocide happening in Sudan right now. People are being murdered, raped & thrown into the Nile river to hide evidence. There is a also media blackout and the Internet is blocked. #PrayforSudan #SudanMassacre #SudanUprsinig 🙏🏼🙏🏼
We pray for SUDAN 🇸🇩 🙏🏼🙏🏼 pic.twitter.com/26Ktkxhcff

7 celebs that have spoken out on the Sudan massacre

"My mind can't fathom what is going on... How humanity can be so inhumane"
TshisaLIVE
3 years ago