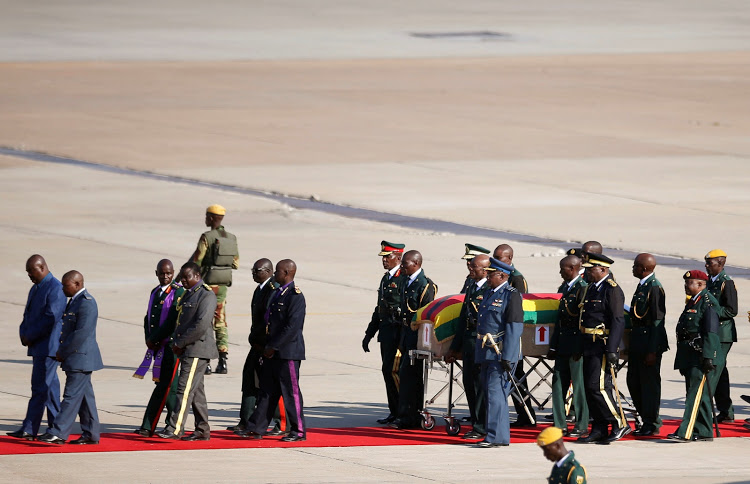 The body of former Zimbabwean president Robert Mugabe arrived in Harare, Zimbabwe, on September 11 2019. He died on September 6 in Singapore, after a long illness.
Image: REUTERS/Siphiwe Sibeko

Zimbabwe’s founding prime minister, Robert Mugabe, will be buried next to his mother, Bona, at Kutama village on Monday or Tuesday.

His nephew, Leo Mugabe, confirmed this to TimesLIVE in a telephone interview on Thursday.

“We are very busy right now, but yes, he will be buried next to his mother,” he said, adding weight to an AFP report that the family had snubbed the national Heroes' Acre in Harare and opted for a private burial at the family homestead.

In a strongly worded statement, Mugabe's other nephew, exiled Patrick Zhuwao, said the family noted with “extreme concern” that the government had gone ahead with preparing a funeral programme without consulting them.

He also accused the government of trying to coerce them into giving in to its demands.

According to Zhuwao, his uncle demanded that in the event he died, his widow, Grace, should not lose sight of his remains until they were laid to rest.

“One of the wishes that the late Robert Gabriel Mugabe indicated was that his wife, Dr Grace Mugabe, must never leave the casket bearing his remains for the duration of the funeral proceedings whilst in Zimbabwe up until his mortal remains have been entered [sic],” he said in a statement.

A traditionalist, Sekuru Banda, said such customs were practised in many African families and they helped the departed spirit to rest in peace.

Mugabe’s body arrived on Wednesday afternoon from Singapore, where he died on Friday at a private hospital. He was 95.

His body will lie in state at the National Sports Stadium in Harare on Saturday for a public event, to which foreign dignitaries have been invited. On Sunday, the body will leave for Kutama village in Zvimba, Mashonaland West.

The body of former Zimbabwean president Robert Mugabe arrived at the Robert Gabriel Mugabe International Airport on Wednesday, with President ...
News
2 years ago

Robert Mugabe may be gone but his children will carry the name, good or bad, in their chosen paths which feature showbiz, farming and mining, for ...
News
2 years ago