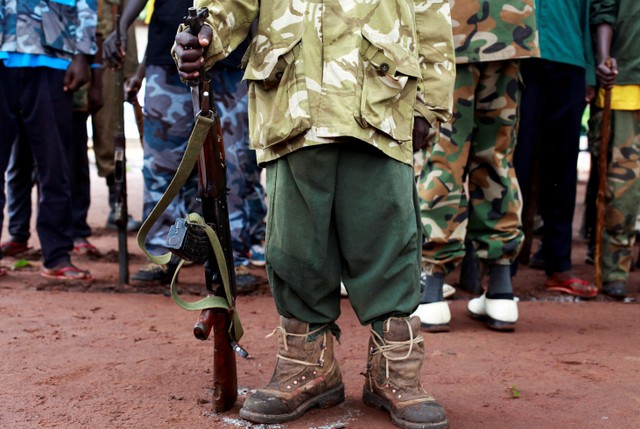 Nigeria's military did not immediately respond to requests for comment. It has repeatedly denied any wrongdoing in response to such accusations during a decade of conflict.
Image: REUTERS/Andreea Campeanu

The Nigerian military are unlawfully detaining boys and men at a rehabilitation centre for alleged members of the Islamist militant group Boko Haram, Amnesty International said in a report released on Wednesday.

In the latest allegations of rights abuses since Boko Haram began its insurgency in Nigeria's northeast, Amnesty criticised Operation Safe Corridor, a programme that receives financial and technical support from the European Union, Britain, the United States and the UN International Organisation for Migration.

Nigeria's military did not immediately respond to requests for comment. It has repeatedly denied any wrongdoing in response to such accusations during a decade of conflict.

"For almost everyone held (at Safe Corridor) to date, it amounts to unlawful detention," Amnesty said of the programme which is based in Gombe state and aims at reintegrating former militants into their communities.

"Many people there are not former fighters who committed crimes, much less were charged or convicted of any crime," it said in a report that also listed alleged rights abuses by Boko Haram and criticised conditions at other military detention centres.

But at least seven men, including two who were boys when in Boko Haram territory, have died in military custody at Safe Corridor between July 2017 and July 2019, Amnesty said.

It said the rehabilitation, meant to last six months, can go on for over three times longer.

Amnesty said conditions at Safe Corridor were "significantly better than at other military-run detention facilities," where the report said security forces beat and torture children and adults they suspect of being Boko Haram members.

The report said Boko Haram continues to abduct children to become fighters and child brides, and that some are raped.

A militia fighting against the Islamist militant group Boko Haram in northeast Nigeria has released 833 children from its own ranks, some as young as ...
News
3 years ago