Matonge, an African home in Brussels 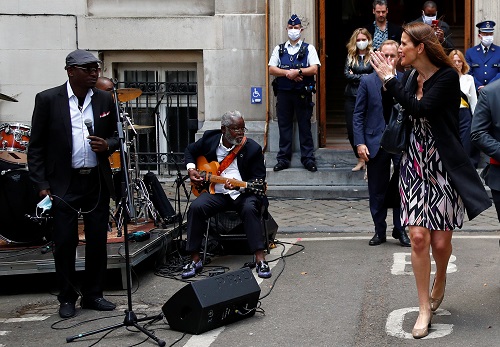 While Belgians confront their colonial past in the wake of global protests over the death of George Floyd in police custody, a neighbourhood in Brussels seen by some as a haven for Black citizens is gearing up for a big celebration.

The Matonge quarter, named after a district in the Democratic Republic of Congo, on Tuesday marks 60 years since the DRC gained independence from Belgian colonial rule.

While social distancing will make the planned barbecues, live music and parties harder to arrange, people say they won't let that get in the way.

"There is no limit here in Matonge; everything is possible," said 34-year-old rapper Gabriel Fodderie.

Statues of colonial-era King Leopold II have been defaced this month as Belgians across the ethnic spectrum joined in anti-racism demonstrations.

In Matonge, known for its hairdressers selling hair extensions, wigs and African cuisine, the focus has also been on reopening after the coronavirus lockdown. Most salons were shuttered from March 18 until May 4.

"I completely understand it (the removal of statues) is being done because one must recognise that a lot of countries we call developed, industrialised, civilised, built their towns with a lot from Africa," said Monique Fodderie, Gabriel's mother who manages the Inzia restaurant named after a street in Kinshasa.

"And it's not taught in history books or schools," she said.

Tucked away between the luxury stores of Brussels' upmarket Avenue Louise and the European Union institutions, Matonge long suffered from a reputation for crime, including drug dealing.

Kelountang Ndiaye, co-owner of L'Horloge du Sud African restaurant, said migrant communities gave the area its unique atmosphere in terms of trade and activities. It is also where he feels safest.

For some, it is simply a home from home.

"It feels like you're in Africa, but in Belgium," said 34-year-old Nicky Chou, who's lived in Belgium for 22 years.

Formula One champions Mercedes unveiled black-liveried cars for the 2020 season on Monday as part of a public pledge to further improve diversity ...
Sport
11 months ago

Nkosana Makate, who has had a bruising battle with Vodacom over payment for the "Please Call Me" idea he developed about 20 years ago, on Monday ...
News
11 months ago