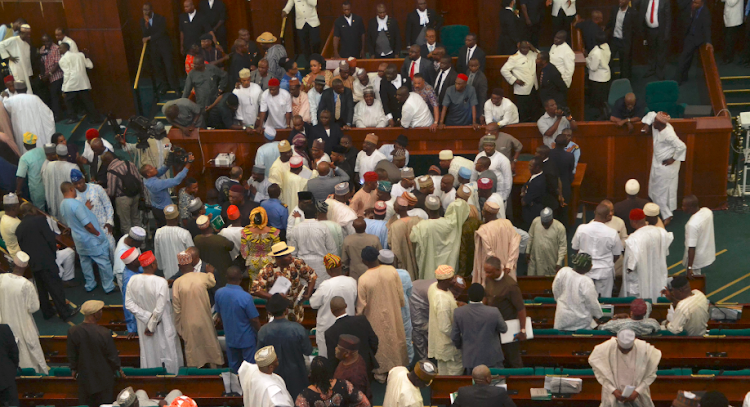 Daniel Pondei, acting managing director of the Niger Delta Development Commission (NDDC), was taken to hospital after slumping forward in his chair during the session, in which he gave evidence to the panel. (File photo)
Image: REUTERS/Stringer

A Nigerian official collapsed on Monday during a televised parliamentary hearing held as part of an investigation into allegations of mismanagement at an organisation with a remit to foster economic development in the oil-rich Niger Delta region.

Daniel Pondei, acting managing director of the Niger Delta Development Commission (NDDC), was taken to hospital after slumping forward in his chair during the session, in which he gave evidence to the panel.

Lawmakers in the House of Representatives, the lower chamber of parliament, are investigating alleged corruption around procurement at the NDDC, a government body, over 20 years. The probe was ordered by President Muhammadu Buhari in October.

Nigeria's oil-producing Niger Delta heartland remains impoverished despite providing most of the oil produced in Africa's biggest crude exporter. Oil is Nigeria's main export and the mainstay of its economy, the continent's largest.

A Nigerian government official, Daniel Pondei acting managing director of the Niger Delta Development Committee collapsed on live TV while facing lawmakers to answer questions on the mismanagement of funds.

Earlier, Pondei told the panel: "There is no money missing in NDDC since I took over in February this year. Everything we have done are in accordance with the laid-down procedures."

After he fainted, people around Pondei rushed to sit him upright, using handkerchiefs as fans and forcing his mouth open in an apparent attempt to ensure he was not choking.

"I have asked my doctor to follow, go to the hospital where he is and report back," House of Representatives Speaker Femi Gbajabiamila later told the panel.

Giving evidence to the panel for the first time, Minister for Niger Delta affairs Godswill Akpabio said Nigeria's Bureau for Public Procurement (BPP) had given its approval for an audit by international firm Ernst & Young.