'There is widespread concern as to where Zimbabwe is headed': US ambassador 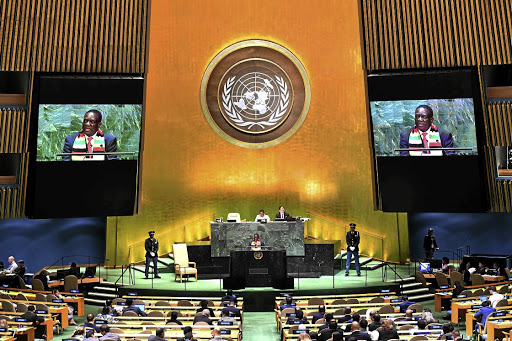 US ambassador to Zimbabwe Brian Nichols has spoken out for the first time since being called a 'thug' by the ruling party.
Image: REUTERS/Eduardo Munoz

The US is rallying the Southern African Development Community (Sadc) to play a more assertive role in helping to solve the deepening crisis in Zimbabwe.

The US is also urging Zimbabwean President Emmerson Mnangagwa to open dialogue with the opposition.

Speaking for the first time since the ruling Zanu-PF called him a “thug”, US Ambassador to Harare Brian A Nichols, told TimesLIVE SA was leading by example and could achieve success in bringing about change in its neighbouring country.

Zimbabwe says it is not on the agenda of the four-day SADC summit, which starts on Friday, because there is no crisis in the country.
News
1 year ago

“The step SA has taken in sending its special envoys here is very positive. The statement from the AU was a very positive step. All those people of goodwill will come together to support Zimbabwe at this difficult moment.”

“There’s widespread concern about where Zimbabwe is headed and people who are legitimate friends of Zimbabwe are deeply worried,” he said.

He said since 2018, after the disputed general elections that handed a narrow win to Mnangagwa, there had been high-level meetings between him and American officials — but what was discussed had not been implemented by Harare.

“We have had a couple of high-level meetings with President Mnangagwa. From Washington, secretary of state for African Affairs, Tibor Nagy has met with President Mnangagwa twice — once on the margins of the UN General Assembly in 2018, and then last year at the African CEO Summit in Maputo. At that time we talked about our desire to have a stronger relationship.

“But that depended on this government pursuing strong and irreversible reforms and, unfortunately, we are waiting for many of those reforms still to take place,” he said.

The ambassador said some of the concerns are “shared mutually” with some senior officials in government who believe the country’s future depends on enacting broad reforms around freedom of expression, rule of law, strong institutions, anti-corruption, and levelling the political playing field.

Nichols is not alone in calling for dialogue between Mnangagwa and MDC Alliance leader Nelson Chamisa. Killer Zivhu, a former Zanu-PF legislator, was expelled from the party last month for making the same call. Last week, former Reserve Bank governor Gideon Gono also suggested dialogue between opposing parties — but instead of having SA play the mediation role, he suggested Rwanda’s Paul Kagame for the task. Gono argued that because of his military background Kagame could do a better job.

Gono suggested that Zimbabwe should have a transitional authority while the country works on a framework for reform before elections are brought back.

Nichols said he believed this could work if all stakeholders acted in good faith.

“That is something that we have supported for the last couple of years. Several civic society organisations are advocating for that solution. How that dialogue progresses and what agreements come out of it, will depend on the people of Zimbabwe. It will depend on all the political, economic and social actors and religious communities coming together and having a conversation centred around how we deal with the challenges of the economic crisis, how do we deal with corruption, as well as health-care issues, and how do we come up with a living wage,” he said.

Despite Harare denying there’s a crisis in the country, there has been an increased onslaught on opposition political activists. MDC Alliance legislator Job Sikhala was on Friday arrested and charged with inciting public violence by backing the July 31 protests. He joins journalist Hopewell Chin’ono and Transform Zimbabwe leader Jacob Ngarivhume who were denied bail.

Zimbabwe's ruling ZANU-PF party last month called Nichols a “thug” and accused him of funding the opposition ahead of the planned antigovernment protests that authorities said were meant to overthrow the government.

Zimbabwe's ruling ZANU-PF party on Monday called the United States ambassador a "thug" and accused him of funding the opposition ahead of this week's ...
News
1 year ago

The National Prosecuting Authority took steps more than a year ago to have former Zimbabwe first lady Grace Mugabe extradited to SA for the alleged ...
News
1 year ago

Government and Catholic Church clash over criticism on human rights

The government of Zimbabwe has revived an age-old rivalry with the Catholic Church through an unrestrained attack, calling the church’s local ...
News
1 year ago