Zimbabwe's Zimbaqua mine, where all the workers are women 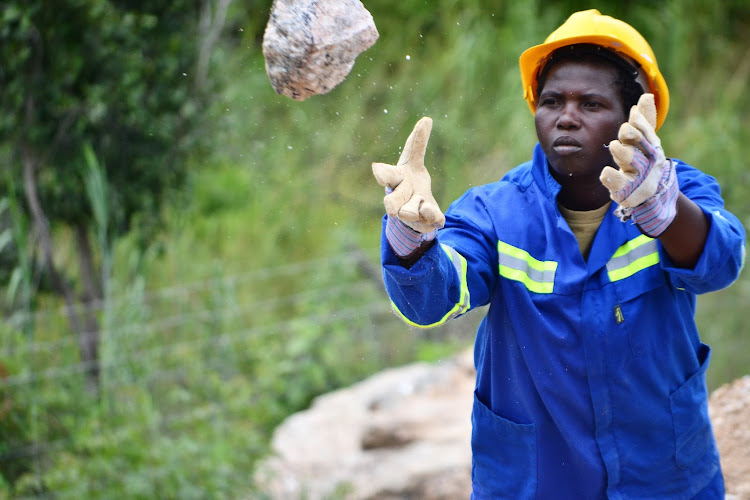 One of the miners at Zimbaqua in Zimbabwe. The mine is Africa's first all-women operation.
Image: Mercy Nhauranwa

The Zimbaqua mine in Karoi, Zimbabwe, is unusual. While it operates like you would expect any mine to, it is those doing the mining that stand out: they are all women.

The 50ha mine, 200km northwest of Harare, was established in 2019. It's all-female workforce of 30 is responsible removing aquamarine gemstones from the ground.

In Zimbabwe, 15% of women work as small-scale miners, an industry which is still largely dominated by men.

One the miners, Esther Chiroroma, said working at Zimbaqua has been life-changing.

It’s inspiring to find women performing roles as mine managers, as drillers

“All I wanted was a better life, and mining has given that. It’s inspiring to find women performing roles as mine managers, as drillers. And working with other women in the mining industry gives me the supportive system I need to balance my role as mother and as a woman in mining,” said Chiroroma.

Zimbaqua is a self-funded mine, with two founding partners. It's focus is on sustainable mining and empowering women. Iver Rosenkrantz, a founding partner and a trained gemologist, told TimesLIVE that they identified a need to create opportunities for women.

“We discovered that as the men went off to look for work, women we left to fend for the family. The mine has helped 30 women who were struggling to feed their families. The whole project created a platform for women to work in a safe environment and earn a good income.

“And for me it’s always been about telling stories, and each gemstone we create tells a positive story about the women,” said Rosenkrantz.

Anatolia Mapfumo, a mine manager and a mother of three, said working in the mining industry made her realise that women were equally capable of doing the job.

“As women, we were told mining is only for men. But now I am competent and gender doesn’t enter my mind when I am doing my job,” she said. “When I started working at the mine, I had no prior experience. I received on-the-job training and eventually I got promoted to mine manager. The opportunity gave me the means to send my children to school and feed my family, something I couldn’t do before,” said Mapfumo.

The opportunity gave me the means to send my children to school and feed my family, something I couldn’t do before

It's not just the extracting that the women will do. The workforce is set to be trained to cut, polish and determine the value of the gemstones.

Patrick Zindoga, the other founding partner of Zimbaqua, said they wanted to set up a fully functional mine which could offer something different that, at the same time, generates additional income.

“The idea of working in partnership with women came up when we said of bridging the gap and the imbalance in the mining sector. Normally when you work with women they put in the time and effort. Women also tend to be more committed and responsible because they bear the weight of the family.

“We faced obstacles — mainly the community saying mining is something women shouldn’t do, and that they are not strong enough. But we dealt with the obstacles head on,” said Zindoga.

Zimbaqua is exporting aquamarine to India and Thailand.

Defence minister Nosiviwe Mapisa-Nqakula has dismissed suggestions by a DA MP that she's no longer fit to hold office after she gave an ANC ...
Politics
1 year ago

Zimbabwe's ruling Zanu-PF party will, in the next few weeks, table in parliament the Patriot Bill, a law that will criminalise communicating with ...
News
1 year ago

There is a veil of secrecy around how the ANC will reimburse the state for the costs of transporting a group of party bigwigs to Zimbabwe in a South ...
News
1 year ago