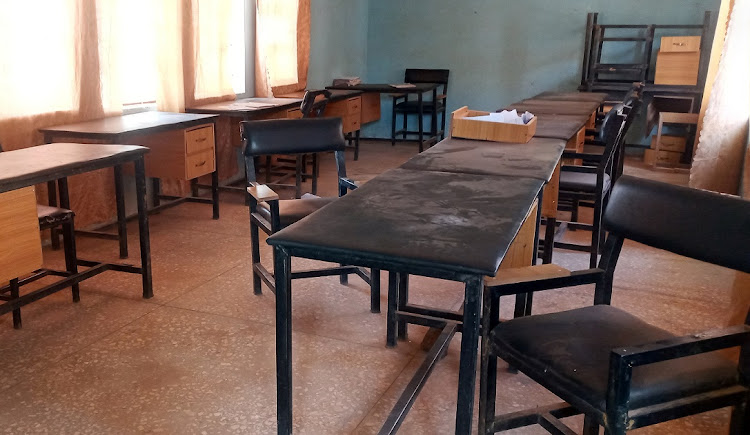 A view of a classroom at the Government Science Secondary School in Kankara district, Katsina state, northwestern Nigeria, after it was attacked by armed bandits on December 12 2020.
Image: REUTERS/Abdullahi Inuwa

The gunmen stormed the Government Science Secondary School in Kankara district at about 9.40pm, and police at the scene returned fire, allowing some pupils to run for safety, police spokesperson Gambo Isah said in a statement.

Police said they were working with the army and air force to determine how many pupils were missing or kidnapped, and to find them. One officer was shot and wounded in the exchange of fire with the gang, they said.

There were chaotic scenes at the school on Saturday as desperate parents and security personnel gathered to search for about half of the school's 800 pupils who were still missing, one parent and a school employee told Reuters.

Katsina, the home state of President Muhammadu Buhari, is plagued by violent bandits who regularly attack locals and kidnap for ransom. Attacks by Islamist militants are common in northeastern parts of the country.

Violence and insecurity across Nigeria have enraged citizens, particularly after scores of farmers were killed, some beheaded, by Islamist militants in northeast Borno state late last month.

Buhari, who arrived on Friday for a week in his home village about 200km from Kankara, was scheduled to brief the National Assembly on the security situation last week, but cancelled the appearance without official explanation.

Nigeria's national electricity grid collapsed on Sunday, the Transmission Company of Nigeria said in a statement.
News
1 year ago

Eight suspected members of Islamist militant group Boko Haram have confessed to involvement in the 2014 abduction of some 270 girls from the town of ...
News
3 years ago

Yana Galang was visiting Dapchi in northeast Nigeria to offer condolences to parents whose daughters were kidnapped by Boko Haram when people started ...
News
4 years ago