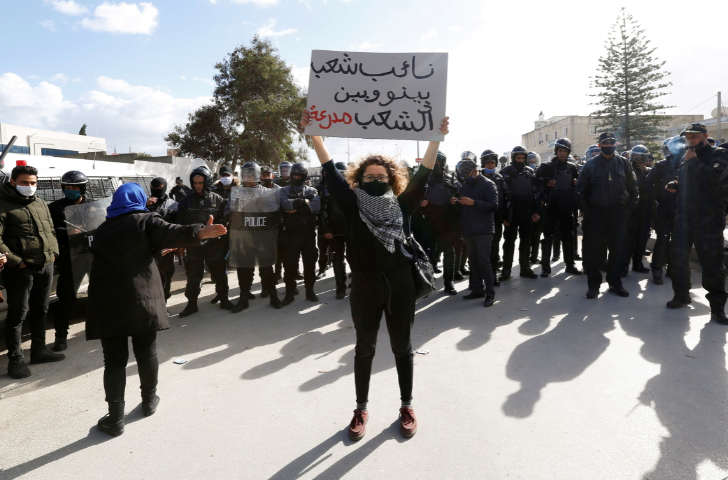 A demonstrator holds up a sign during an anti-government protest in Tunis, Tunisia on January 26 2021.
Image: REUTERS/Zoubeir Souissi

Hundreds of Tunisians marched in the capital on Saturday to protest against police abuses they say are endangering freedoms won in the 2011 revolution that swept away authoritarian rule.

Hundreds of riot police confronted the demonstrators, leading to scuffles. Some protesters threw bottles, while police struck some demonstrators with batons.

There have been near daily protests since the mid-January, the anniversary of Tunisia's revolution that sparked uprisings across the region in 2011, known as the Arab Spring. Tunisia was the only Arab state to emerge with a democratic system in place.

Amid sporadic clashes, police have arrested more than a thousand people during demonstrations over the past two weeks against financial inequality, the marginalisation of poor areas and what protesters say have been heavyhanded police tactics.

A young man died in the central city of Sbeitla last week, which his family blamed on him being hit by a teargas canister.

In Tunis, hundreds joined a protest in the centre of the capital with scuffles erupting as police blocked the way to the main Avenue Habib Bourguiba, where the Interior Ministry building is located.

Some protesters threw bottles at police, while about 10 officers used batons to beat them back and stop them accessing the avenue, a Reuters witness said.

"They want to steal the principles won since the revolution," said Mohammed Smida, a protester who compared Prime Minister Hichem Mechichi to former autocrat Zine al-Abidine Ben Ali, whose was ousted in 2011 after almost 25 years in power.

"Today our right to protest is threatened by the new Ben Ali," Smida said.

Soldiers opened fire on Nigerians protesting against police brutality in the Lekki district of the commercial capital Lagos on Tuesday, and at least ...
News
1 year ago