Sudan due to send first delegation to Israel next week, sources say 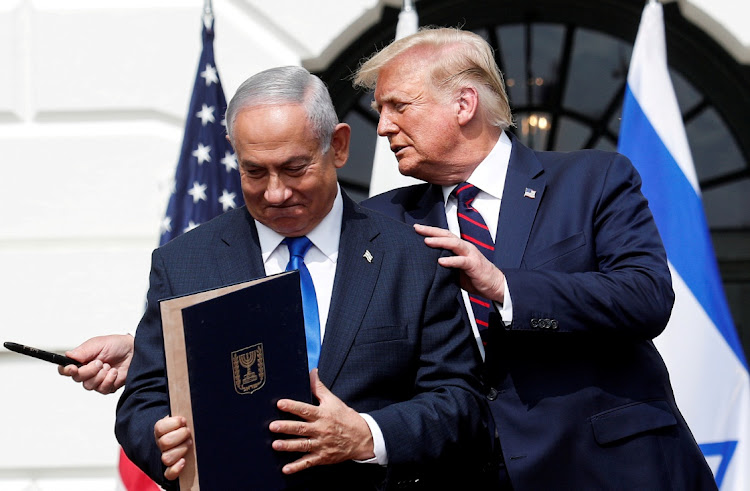 Israel's Prime Minister Benjamin Netanyahu stands with former US President Donald Trump after signing the Abraham Accords, normalising relations between Israel and some of its Middle East neighbours, in a strategic realignment of Middle Eastern countries against Iran, on the South Lawn of the White House in Washington, US, on September 15 2020.
Image: REUTERS/Tom Brenner/File Photo

Sudan provisionally plans to send a first official delegation to Israel next week to firm up bilateral ties that were established last year under US mediation, two sources said on Tuesday.

One of the sources, who could not be identified by name or nationality, said the Sudanese delegation would comprise security and intelligence officials. The specific date for next week's visit had yet to be finalised, the source added.

Sudanese and Israeli government spokespersons had no immediate comment.

Sudan joined the United Arab Emirates, Bahrain and Morocco in agreeing to move towards normal relations with Israel in 2020 Abraham Accords deals brokered by the Trump administration. The Biden administration has pledged to pursue such outreach.

The normalisation is seen in Sudan as an initiative led by the military, which has welcomed visits by Israeli officials in recent months. In a related measure, the Khartoum cabinet voted last week to repeal a 1958 law that forbade diplomatic and business relations with Israel.

Donald Trump is expected to leave the US presidency on January 20.
Opinion & Analysis
4 months ago

Israel will hold a snap election in March after parliament failed on Tuesday to meet a deadline to pass a budget, triggering a ballot presenting new ...
News
4 months ago

The US-brokered Sudan-Israel deal to normalise ties is "phony" and was secured by a "ransom", Iran’s Foreign Ministry said on Saturday.
News
6 months ago
Next Article