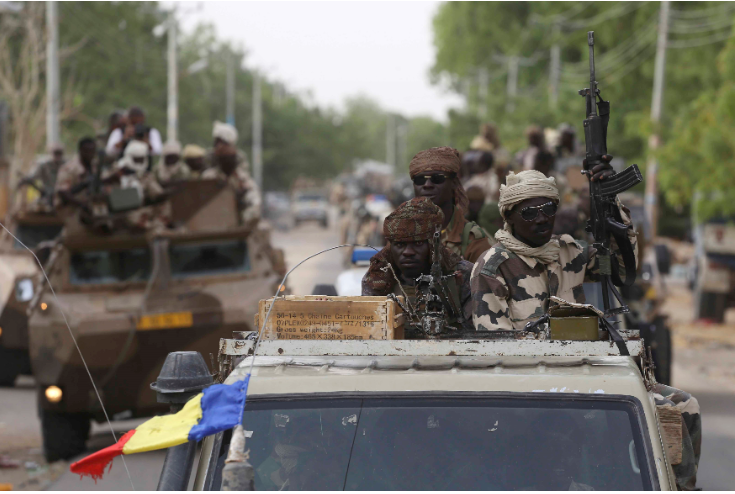 In N'Djamena, schools and some businesses were open on Wednesday but many people stayed home and the streets were quiet.
Image: REUTERS/Emmanuel Braun (NIGERIA - Tags: CIVIL UNREST MILITARY POLITICS)

The son of Chad's slain leader Idriss Deby took over as president and armed forces commander on Wednesday as rebel forces threatened to march on the capital, deepening the turmoil in a country vital to international efforts to combat Islamist militants in Africa.

The political opposition also denounced the military's takeover of control, calling the move a coup d'etat and rejecting its plan for a transition. Labour unions called on workers to go on strike.

Deby, 68, was killed on Monday on the frontline in a battle against fighters of the Libyan-based Front for Change and Concord in Chad (FACT), a rebel group formed by dissident army officers.

His death shocked the nation and raised concerns among Western allies, notably France and the United States, who had counted on him as an ally in their fight against Islamist groups including Islamic State and Boko Haram.

Deby had been in power since 1990 and had just been declared winner of a presidential election that would have given him a sixth term in office. His son, General Mahamat Idriss Deby, was named interim president by a transitional council of military officers just after news of his death was announced.

General Deby, 37, moved to consolidate his position on Wednesday, with the council issuing a new charter in place of the country's constitution granting him the functions of president and also naming him as head of the armed forces.

The council's vice-president, Djimadoum Tirayna, had said earlier that the army wanted to return power to a civilian government and hold free and democratic elections in 18 months.

He reiterated that on Wednesday, saying in a statement the military was "in no way seeking to seize power".

But the FACT rebels rejected the military's plan and said they would press on with their offensive.

"Chad is not a monarchy. There can be no dynastic devolution of power in our country," FACT said in a statement.

Libya-based rebels have set their sights on Chad's capital N'Djamena after the battlefield death of President Idriss Deby on Monday.
News
1 year ago

A spokesman for the group - which is not linked to jihadists - said they were now in Kanem region about 200-300 km (125-190 miles) north of N'Djamena and that their aim was to bring democracy to Chad after years of authoritarian rule by Deby.

FACT claimed responsibility for the injuries that killed Deby on Monday. An ex-army officer who often joined soldiers on the battlefront, Deby was visiting troops who had held up the rebel advance in intense fighting over the weekend.

He was wounded by gunfire in the village of Mele near the town of Nokou, more than 300 km (190 miles) north of N’Djamena, and evacuated to the capital where he later died, said the FACT spokesman, who requested anonymity.

"We don't want to seize power to hold power. Our objective is for democratic transitions to be a reality," he said. He said the group was preparing to march on N'Djamena to "free the people from a system that is undemocratic".

Opposition politicians, many of whom boycotted the election, also called for a return to civilian rule.

About a dozen party leaders who met on Wednesday condemned what they called "the institutional coup d'etat conducted by the generals" and "the monarchist devolution of power".

In a statement, they called for a transition led by the people through dialogue.

"We do not see ourselves in this military transition. Our position is a return to constitutional order and a civil transition to ease tensions and to organise elections in due course," Dinamou Daram of the Socialist Party Without Borders, told Reuters.

Opposition leader Succes Masran said a campaign of civil disobedience would be launched from Friday. The main labour organisation, the Union of Syndicates of Chad, also rejected the military takeover and called for a strike.

"The executive bureau asks all workers to stop working and to remain vigilant until the situation is clarified," it said.

Reuters reports Chad’s President Idriss Deby has died while visiting troops on the frontline of a fight against northern rebels.
News
1 year ago

Deby had won friends abroad by sending his well-trained army to fight jihadists including Boko Haram in the Lake Chad Basin and groups linked to al Qaeda and Islamic State in the Sahel.

His main ally, France, has about 5,100 troops based across the region as part of international efforts to fight the militants, including its main base in N'Djamena. The United States also has military personnel there.

Paris said it had lost a courageous friend and an important ally. President Emmanuel Macron will go to Deby's funeral.

Nigeria's foreign minister said it was willing to help a dialogue, but that while an early return to democratic rule was the ultimate goal, the immediate objective was the stabilisation of Chad and the region.

Human Rights Watch criticised the West's relationship with Deby, saying that for years it had propped up Déby's government for its support for its security operations while turning a blind eye to his repression.

"The potentially explosive consequences of President Déby’s death cannot be underestimated – both for the future of Chad and across the region," it said in a statement.

In N'Djamena, schools and some businesses were open on Wednesday but many people stayed home and the streets were quiet.

Authorities imposed a nightly curfew and closed land and air borders after Deby's death was announced. A 14-day period of national mourning is being observed.

"We must make sure that this military council does not take over power, said Djimadoum Ngarteri, a teacher. "And to all those fighting with weapons, it is time to lay down their weapons. We the Chadians are fed up. We do not need people who take power with weapons."