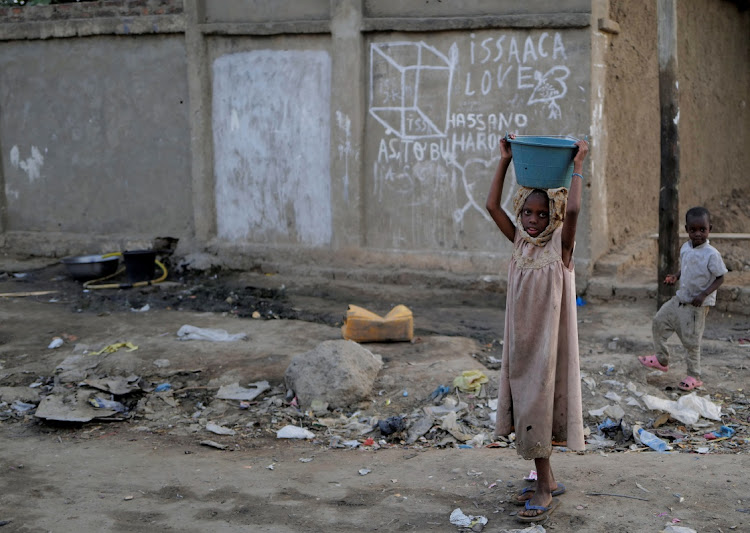 A girl carries a basin in a poor neighbourhood, as rebels in northern Chad are ready to observe a ceasefire and to discuss a "political settlement" after the battlefield death of President Idriss Deby last week in N'djamena, Chad April 25, 2021.
Image: REUTERS/Zohra Bensemra /File photo

Chad's ruling military council has rejected an offer from northern rebels for a ceasefire and talks, calling them “outlaws” who needed to be tracked down and arrested for their role in the battlefield death of President Idriss Deby.

The rebels, known as the Front for Change and Concord in Chad (FACT), said on Sunday that they were ready to discuss a political settlement, two weeks after they poured over the border on election day demanding an end to Deby's 30-year rule.

They came as close as 200-300 km (125-185 miles) from the capital N'Djamena before being pushed back by the army. The air force has since bombarded rebel positions, the military and rebels said. The military said on Saturday it had “annihilated” the rebels.

“Faced with this situation, that is endangering Chad and the stability of the entire region, it is not the time for mediation or negotiations with outlaws,” spokesman Azem Bermendao Agouna said in a statement. He said some of the rebels had fled into Niger and asked authorities there to capture them.

Deby was killed on April 19 while visiting troops at the front, just after he won the election. His death shocked the Central African country, which has long been a Western ally against Islamist militants.

After Deby's death, a military council headed by his son, Mahamat Idriss Deby, seized power and said it would oversee an 18-month transition to elections. Opposition politicians called this a coup. The rebels said they would not accept a “monarchy” and vowed to march on N'Djamena, before meeting resistance.

“FACT is ready to observe a ceasefire for a political settlement that respects the independence and sovereignty of Chad and does not endorse a coup d'etat,” FACT spokesman Kingabe Ogouzeimi de Tapol told Reuters on Sunday.

The military council is under pressure to hand over power to a civilian transitional government as soon as possible. The AU has expressed “grave concern” about the military takeover, while France and regional powers are pushing for a civilian-military solution.

A move towards temporary civilian-military rule could offer Chad a way out of the crisis. Niger's President Mohamed Bazoum and Mauritanian President Mohamed Ould Ghazouani are acting as mediators on behalf of the AU. United Nations representatives are also holding talks with both sides.

A consensus is emerging among opposition politicians and civil society to support a transitional civilian president with a military vice-president or prime minister, they told Reuters.

The proposal would mirror a transition in Mali, where a coup last August prompted international calls for the military to relinquish power. A civilian president was appointed with a vice president from the military, though the Malian opposition are still concerned about the military's hold on power.

“Most of us are in favour of cohabitation between the military, politicians and civil society,” said Mahamat Ahmat Alhabo, president of the opposition PLD party. “The Malian model ... is very inspiring.”

Any agreement will require co-operation from the military council. Its spokesman, Azem Bermendao Agouna, said it was open to discussions, but added: “The army will solve all the major challenges and will organise free and transparent elections.”

Chad rebels say they are ready for ceasefire and talks

Rebels in northern Chad are ready to observe a ceasefire and to discuss a political settlement after the battlefield death of President Idriss Deby ...
News
1 year ago

WILLIAM GUMEDE | For the sake of Africa, Chad must seize this rare chance for democracy

Chad’s liberator was its curse

Rebels in northern Chad were preparing to advance on the capital N'Djamena, a spokesman said on Saturday, after the funeral of President Idriss Deby ...
News
1 year ago