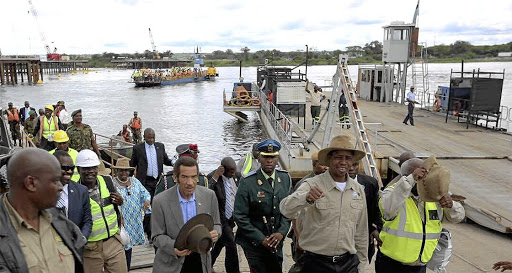 Botswana and Zambia have agreed in principle to incorporate Zimbabwe into the Kazungula Bridge lying across the Zambezi River and the One Stop Border Post linking the two countries.

Initially, the late former Zimbabwean president Robert Mugabe was against the bridge construction because Botswana and Zambia don’t share a land border.

The sentiment was the same during the colonial era when Rhodesia and SA, which administered South West Africa (Namibia), declared the route illegal.

During construction the bridge was reportedly designed to curve away from Zimbabwe, so as not to encroach on its territory.

On Monday, the bridge was commissioned by Zambian President Edgar Lungu and Botswana President Mokgweetsi Masisi. It creates an alternative “north-south corridor” ultimately connecting Cape Town in the south and Cairo in the north, bypassing Zimbabwe.

Speaking at the ceremony, Masisi said: “I am happy to note that the Republic of Zimbabwe and ourselves [Botswana] and Zambia have agreed in principle to be a partner in this project. Our officials are working, and they will work increasingly faster and harder, to complete the remaining works with Zimbabwe.”

In his address at the ceremony, Mnangagwa said: “In the fullness of time, Zimbabwe will be part of this hallmark project, which accelerates our regional integration efforts.”

Zimbabwe intends to join in the bridge's last phase and has offered to pay for a third of the $259.3m project.

“We have agreed with our counterparts, the government of Botswana, the government of Zambia, we are now part of the Kazungula bridge and subsequently we are going to be paying our portion of the development of that bridge,” Zimbabwe’s foreign affairs minister Fredrick Shava told journalists.

Though there’s now an agreement in principle, last week Mnangagwa said that Zimbabwe joined the project in 2018 but he has since changed his statement — and jokes directed at him stole the day on Twitter.

Media activist Hopewell Chinon’o likened Mnangagwa to a neighbour who went around claiming paternity instead of bringing gifts and congratulating.

@sedzejacob on Twitter accused Mnangagwa of “embarrassing the nation”, adding that just because he led a coup against the late Robert Mugabe he was setting his eyes on the bridge.

The Zimbabwean government is desperately trying to convince neighbours Botswana and Zambia to include it again in the multimillion-dollar bridge ...
News
3 years ago

New Zambezi bridge to cut out Zimbabwe and cut down time

A 923m bridge, due to be completed in 2019, will link Botswana and Zambia and bypass Zimbabwe.
News
4 years ago